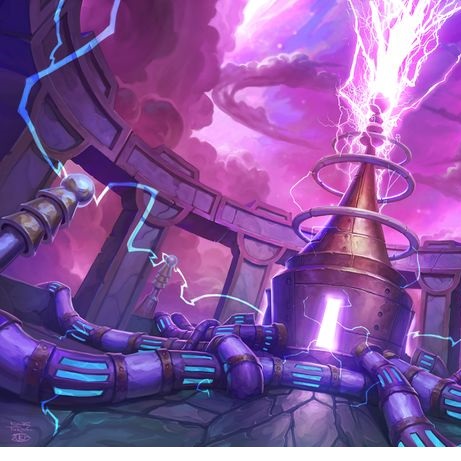 I’m CK1ne and here I come with another ranked hearthstone deck. Today I want to present an aggro hybrid shaman deck, mostly based on lackeys. I started to play with this deck a day ago, I mainly used it for Brawliseum (5-3, 5-3 <- before HDT installation, and 9-3, 7-3, 5-3 with active Deck Tracker). I also climbed a bit, highest rank is 9, because I hadn’t play standard for two months.

Basically you want to play on curve as all aggro decks, so you look for Sludge Slurper, Murloc Tidecaller, EVIL Cable Rat and EVIL Totem. Lackeys, especially Faceless Lackey are ultra good in early game.

Against quick board-developing decks you want to keep a Sandstorm Elemental, Mogu Fleshshaper&Mutate and Vulpera Scoundrel - digging for a removal spells if necessary.

Against Rogues, Mages and other value oriented decks:

You want to keep your ordinary mulligan cards, lackey generators for impact on early game and Thunderhead for more board control. You also may want to keep the 7 mana rush, cause this + Mutate comes in handy even without opponent’s board. Also you are trying to pull the Former Champ combo on turn 4-6.

You want the murloc package ! Underbelly Angler&other mrggl folks are the MVPs of this matchup. You can quickly make big board and high attack Murloc Tidecaller with infinite resources. Most games you can cast critical Bloodlust on curve. If not, try to swarm the board, and make tempo swing with The Storm Bringer.

Mutate - this card turned out to be good. Paired with Former Champ or Mogu Fleshshaper can cheat out some mana.

Sludge Slurper - it's a murloc, it gives you lackeys and it overloads. All deck synergies in this one drop !

EVIL Totem - if protected properly, this card can give you 2-3 lackeys in every game. Obvious pick in an aggro deck.

Sandstorm Elemental - a Maelstrom Portal on a very good body. And the payback turns out to be very little.

Underbelly Angler - core of murloc package, very efficient resource generator on a solid body. Coined out on turn 1 with murloc follow-up is almost perfect start of the game with this deck.

Thunderhead - after a quite recent buff to this card, it can survive even longer helping you to control the board. Its effect paired with f. e. Sandstorm Elemental can be a nice removal.

Vessina - with a solid statline, this minion is a card that changes your small tokens into bigger threats. Not sure if it's a necessary legendary, but it pumps extra power into this deck.

Bloodlust - a staple in every aggro shaman deck, turns board of small tokens into around 30 damage.

The Storm Bringer - a card that I wasn’t fan of when I dropped it (it was horrible for a f2p), but now I love it. In an imgur gallery above I’ll try to throw in some screenshots, but 3-4 legendaries with 5-5 statline on average on early turn is irremovable for most of decks. To be honest, this card wins you half of the games.

Mogu Fleshshaper - with release of Saviors of Uldum shaman got another tool to fight aggro decks. The 3 attack rush minion is already decent, and when you Mutate it’s a huge mana cheat (be aware of Hir'eek, the Bat).

Shudderwock - in this deck, Shudder is not a killer. Basically what it does - 1. Refill your hand with lackeys&random spells 2. Deal some damage to random targets 3. Summon some 2 drops and 5/5s. If you have minions on board, Shudderwock can do more, f.e. buff your minions or evolve them. Anyway, in this deck it’s not a win condition. It’s a card that’s nice to play when you fill out ouf fuel.

Murloc Tidecaller - if you start murloc fiesta with Underbelly Angler, that’s one of the strongest. Quick 5-6 damage on every turn helps with winning, trust me.

EVIL Cable Rat - another lackey generator. I personally really like it, especially with Witchy Lackey on turn 3 if possible.

Vulpera Scoundrel - anyone could say that Haunting Visions is better to discover a spell. But in this deck this 2/3 body can be quite important, and the effect is repeated by Shudderwock, so I included one copy in this deck.

Former Champ - yet another powerful effect for Shudder. I love its simple combo with Mutate too.

Thunderhead - well, I would say that it's irreplaceable. It is huge part of our board control section in this deck, and fighting with aggro would be very tough. If I had to replace it, maybe Lightening Storm would be fine.

Vessina - although it's not the best, I would use Flametongue Totem, as it has same effect. (Try to craft her)

Shudderwock - it's definetly worth crafting, because in my opinion, it's the best shaman standard legendary. If you can't afford it, use Storm Bringer or Feral Spirit

Thanks for reading !!! I'll reply to every comment, so don't hesitate to ask me anything. Cheers, CK1ne !

(pssst, I've updated the gallery, where now you can find some gameplay best moments !)