Normally you want to complete the quest ASAP and overwhelm the opponent with the value, which your upgraded hero power will produce. In order to accelerate the quest completion process, you can copy the lackey generators with the Bog Sloshers and sometimes with Zola the Gorgon.

Going second will be very beneficial for you, if you face slow decks. If you play Loatheb, you can hero power and coin out Shudderwock.

Not a common encounter, but I've met three types of warriors in the following popularity order:
Quest Bolster - Kinda unfavourable, but it's winnable. You just have to hard mulligan for lackey generators and card draw. The sooner you fulfil your quest and start spamming jades, the better. Kill the opponent's taunts and limit the cards they will draw from Battle Rage. Against buffed threats, you have Devolve and Plague of Murlocs. The only removals they run are Brawls, Warpaths and Blood Razors, so try to play around them. Once the opponent uses both Brawls, making your jades stick will be easy.
Pirate - How well you will do in this MU depends on the starting hand. Look for Maelstrom Portal/Sandstorm Elemental, Questing Explorer and Devolve, in order to break the pirate synergy. Other than that, try to complete your quest fast and overwhelm the opponent with your value.

Standard Control/ Odd - Extremely favoured. If you've started the game with some lackey generators, your quest will be completed in no time and it will snowball out of hand. Be conservative with your jade swarms, i.e. don't play into Brawl. Find and play Loatheb and then completely shut down the warrior's defensive tools.

This class was really popular in the last expansion, but now I barely face it.

Mech - How well you will do in this MU depends on the starting hand. Look for Devolve!!!/Plague of Murlocs, Questing Explorer. If you went first and got Sludge Slurper in the mulligan stage, play it on turn 1. That way you contest Cogmaster and in case your opponent coins out Mechwarper, the generated lackey might help you deal with it. Nothing else much to say - just kill their mechs, in order to deny them from getting magnetized or buffed with Metaltooth Leaper.

Reno -  Favoured. They don't pressure us that much, so try to complete the quest fast and overwhelm the opponent with our value. Cards to watch out for - Pressure Plate, Sylvanas Windrunner (cast Devolve or Plague of Murlocs on her, you don't want to deal with Nine Lives), Houndmaster Shaw and Dinotamer Brann. It's a good idea to draw a lot of cards and find our jade summoners, Loatheb (in order to prevent Zephrys the Great from finding a useful AoE) and Shudderwock before the opponent builds horrific zombeasts.

This class is somewhat popular.

Odd - I think this MU is favoured, but you will lose the game, if your starting hand is bad. Look for Sandstorm Elemental, Maelstrom Portal and Questing Explorer. If the opponent has a secret, 99,99% of the times it will be Never Surrender!. Use the elemental in that scenario or Devolve and portal, if you only have the 2-mana AoE. Kill the dudes, cuz you don't want to see them getting buffed by Quartermaster. Establish board control and win from there.

Aggro Handbuff Mech - How well you will do in this MU depends on the starting hand. Mulligan hard for Devolve and/or Plague of Murlocs. The rest can be portals or lackey generators or card draw.

Tip the Scales - Look, this is a stupid highrolly deck. Either they play the 8-mana spell on turn 4 and you lose or they don't. Try to find Devolve, AoEs and cheap things to play. In the past I ran taunts and completely blocked the damage from the chargers, so hope you get Titanic Lackeys.

Rare encounter (at least for me).

Odd - How well you will do in this MU depends on the starting hand. Find AoEs for their turn 1 pirates, card draw and lackey generators. If you find Jade Lightning, you can use it to kill their Hench-Clan Thug, which is nice. Fight for board control at all cost. Play around Dark Iron Skulker.

Very common encounter. There is a big variety here, so let's check the different matchups one by one:
Even Overload - kinda unfavoured, but it's still winnable. Look for Plague of Murlocs (you can counter their wide gigantic board with it), lackey generators and card draw. Count how many minions there are on the board and try to delay the opponent's Sea Giant. If you manage to achieve board control, it will be gg.

Highlander Even Overload - similar as above, you will win if you manage to gain board control. Find Jade Claws, Devolve and either lackey generators or card draw.

Murloc (quest or questless) - I consider this MU being favoured. Find Devolve, Jade Claws and AoEs. Prevent the opponent's board from going wide, else expect a lot of burst from Everyfin is Awesome and Bloodlust.

Shudderwock TTK - favoured, but you have to be aggressive. Complete the quest fast, play Loatheb and Shudderwock.

A somewhat common encounter. There is a big variety here, so let's check the different matchups one by one:

Reno Warlock - favoured, but it's still losable. This can happen if the opponent Dirty Rats Shudderwock or beats you with their demonic board. Cast Devolve on Voidcaller, Plague of Murlocs on Voidlord. Find your lackey generators, complete the quest fast and overwhelm the opponent with the jades. That said, you should be conservative and play around some AoEs - Defile, Hellfire, Despicable Dreadlord, Twisting Nether, Zephrys the Great, Kazakus.

Mecha'thun Warlock - favoured, unless the opponent plays Hemet, Jungle Hunter relatively early. Find all of your card draw tools, find Loatheb, Zola the Gorgon (she should copy him) and Shudderwock. Cast Devolve on Voidcaller, Plague of Murlocs on Voidlord (unless you have a threatening board).

Zoo Warlock - How well you will do in this MU depends on the starting hand. Find Devolve, Jade Claws and lackey generators. Fight for control over the board and win from there.

Darkest Hour Warlock - Look, this is a stupid highrolly deck. Either they summon a threatening board by turn 4-6 or they don't. You will probably mulligan for the other matchups, but if you find Plague of Murlocs and you can play it, you will win.

Even Warlock - unfavoured, but winnable. Find lackey generators, so that you have ways to deal with a turn 3/4 Mountain Giant. Don't harm the opponent, else they will play an early Molten Giant/Hooked Reaver. Devolve should hit Diseased Vulture or the reaver. Try to play around Defile and Hellfire.

Sn1p-Sn4p Warlock - How well you will do in this MU depends on the starting hand. Find Devolve/Plague of Murlocs, lackey generators and card draw. Complete the quest fast and hope you get Titanic Lackeys.

Cruel Dinomancer Warlock - How well you will do in this MU depends on the starting hand. The MVPs here are Devolve against Expired Merchant and Plague of Murlocs against a big board full of Cruel Dinomancers. The deck runs Defile and Plague of Flames, so don't overextend.

Well, if isn't this a common encounter?

Burn Mage - I consider it to be very unfavoured, because the opponent is way too aggressive. Mulligan hard for Eater of Secrets, Questing Explorer and lackey generators. If you get the opportunity to copy the secret tech, do it, as you will increase the likelyhood of winning the game. Sometimes it will be a good idea to trigger secrets, in order to deny the burn from Medivh's Valet and Cloud Prince, so throw away cheap spells to remove Counterspell, hit the face before you summon minions (Flame Ward), kill the weakest minions (in case the opponent runs Duplicate).

While I'm on this topic, I might as well rant about this deck for a bit. I've ALWAYS hated playing against it, even when it was still in standard back in K&C. It's such a gamble to predict what kind of secrets the opponent plays against you - sometimes it's logical to assume, that they have Explosive Runes to deny your tempo or Counterspell to protect one of their minions, but other times you can't know for sure, because they want to activate Medivh's Valet and Cloud Prince, and playing around both secrets by not doing anything will put you in a bad position. I've always hated how Counterspell consumes the mana I spend on the spell I planned to cast and how I can't do anything else on the same turn, while the opponent gains free face damage and gets to develop even more threats. Rant over.

Reno Mage - favoured. Complete the quest fast and overwhelm the opponent with your jades. Save Devolve against their Doomsayer, play around Skillstrike, Blizzard and Reno the Relicologist. Try to minimize the value from Icy Touch by bumping your 1-health minions into the opponent's threats. I would advise you to kill Kazakus and Zephrys the Great, if the mage played them to find an AoE, in order to deny those cards from getting copied with Zola the Gorgon. Beware of Dirty Rat.

Miracle Mage - How well you will do in this MU depends on the starting hand. Try to develop a sticky board early on, so you make Flamewaker worse. We have Jade Lightning and Devolve for him, so dealing with him shouldn't be an issue. If the opponent's quest completion is almost finished or it's already completed, I would suggest to heal yourself, to taunt your minions and be aggressive. Oftentimes I just try to be aggressive w/o doing the other things first, but the opponent always surprises me with two Arcane Giants.

Due to Burn Mage's popularity, Big Priest is a rare encounter. You might face it more often on the milestone ranks.

Big Priest - I consider this MU to be favourable, unless the opponent pulls off some BS turns early on. The MVPs here are Plague of Murlocs and Devolve, so mulligan hard for those cards. Find lackey generators, Bog Slosher and complete the quest fast. Devolve must be used against Archmage Vargoth, Plague of Murlocs against the big bois (Y'shaarj, Rag and LK). Find more copies of those spells from the Ethereal Lackeys. Overwhelm the opponent with your jades and Shudderwock (hopefully you will have played Loatheb by then).

Against the quest version of big priest - just don't hit them, if your minions are weak. 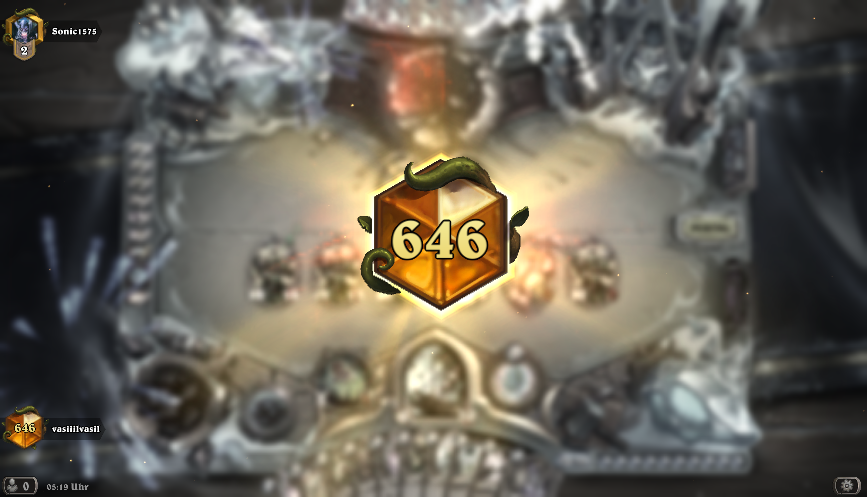 I started climbing from rank 6.

- Zilliax - many people advised me to add him, since he fulfils multiple roles at the same time. If you want, you can add him, but I can't really tell what cards you should cut in favour for him. Probably a Bog Slosher. Eater of Secrets is way too valuable in this meta, so he shouldn't be cut.

- Second Eater of Secrets if you really, really face that many burn mages. When I was on rank 2, I've queued up against 6 or 7 in a roll, but once I reached rank 1, I've played against 5 in total.

- Second Devolve - if you face a lot of swarm decks.

- Second Plague of Murlocs - if you face a lot of Big Priests (for some reason).

- 2x Rummaging Kobolds - if you want to have fun.

Big thanks to Yusuke and the people from the Jade Shaman thread for their help on my decklist.