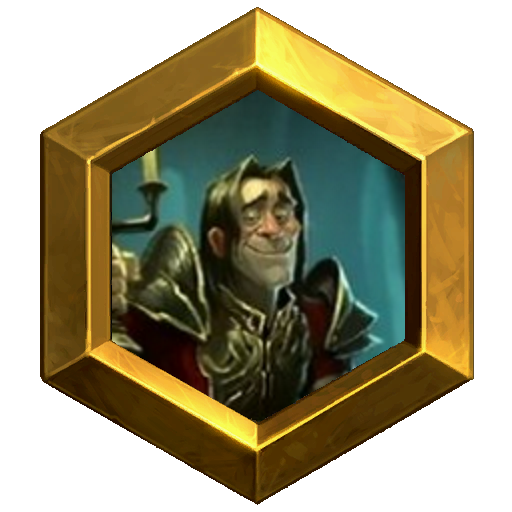 A Storm-(an MTG mechanic/archetype)-esque Miracle Rogue list that mostly just sits as a proof of concept. The idea is to assemble Umbral Skulker, Spirit of the Shark, and Spectral Pillager to deal quite a bit of damage in one turn. The list is significantly powered up by Galakrond, which is a mainstay of the Skulker package. An invoked Galakrond can let you power out a kill a lot quicker and a lot more assuredly--there's a ton of redundant card draw in the deck, and hitting them off of Galakrond feels pretty good when setting up Shark + Pillager, and the 5/2 weapon is nothing to ignore (the hero power also makes Skulker better!). The deck seems like it also could handle midranged matchups well by becoming the pseudo-control deck in the matchup, which as a prospect alone is pretty bonkers, time will tell if that pans out.

I'm particularly amazed by the power level of Brann Bronzebeard here, which I initially thought wouldn't be that great. Considering Elven Minstrel can pretty reliably assemble pieces, he lets you double your coin generation, double your draw with Novices, double your super draw effect with Galakrond, double invoke through Devoted Maniac or Shield of Galakrond (which make extra Lackeys, which you can double the battlecries of), and double Kronx Dragonhoof, who may actually be a staple for this deck as he can tutor Galakrond, AND deal significant damage, AND wipe the board, AND develop a body. I've been theorizing a good bit of the Galakronds and this seems the best home so far for Kronx so far.

EDIT: I added Heistbaron Togwaggle to the list, replacing Fan of Knives, which was truthfully a pretty tech choice anyway. Togwaggle, and more specifically, Wondrous Wand, could potentially add a lot more consistency, and through being a Battlecry creature, it should improve the powerlevel of the first Brann Bronzebeard/Spirit of the Shark, which is typically a dud to keep in hand anyway as they're almost on the pricey side and will clog your hand during your Spectral Pillager turn. I'm suggesting Togwaggle over Myra's Unstable Element because the deck probably can't afford to play Preparations, and a few 0-mana cards that can often draw more cards are a lot more powerful than a full hand of clunky, expensive, uncastable cards. TL;DR: Togwaggle + Invoked Galakrond should be far more than enough to draw a super high amount of cards on the cheap and would enable you to go off way easier than anything else.

UPDATE (12/12/19): I've been experimenting with the deck and I'd say this is a more optimal build. However, it's really, really, really hard on a technical side. This is perhaps the hardest deck to play APM wise. Ever. The 75 seconds they give you is about 10-15 seconds, on average, too little. For someone with high APM, I recommend this deck, because it actually is kinda nuts in a control meta, and it's just a lot of fun to play. I've had many instances where I end up not finishing off an opponent entirely because of my last action or two being just a hair too slow. If you're slower than I am, expect to be punished very, very hard by Reno Jackson. That said, the deck has had a surprising level of rebound ability. I'm not really a Hearthstone player anymore, but if I continue experimenting with this deck I'll update it, and if I think there's something actually viable here I'll explain why and how.