What is Double Attack in Legends of Runeterra?

Legends of Runeterra has many card effects that are common enough that they get their own keyword - a word or two that immediately tells you how the card works. Let's take a look at the Double Attack keyword.

While attacking, it strikes both before AND at the same time as its blocker.

Double Attack is a greater version of Quick Attack, allowing your unit to attack twice in a single round of combat. That's pretty OP!

Like Quick Attack, units with Double Attack get to strike before the blocker can react, possibly defeating them right then and there. If that's not enough, a second attack happens like you would normally expect during the blocking phase, allowing for twice the damage. Use this to trade up into much larger enemies, or to get through a Barrier.

Barrier is a strong combination with Double Attack. Double Attack already allows your unit to strike first and potentially kill an enemy outright before the block; with Barrier, you could make sure that your ally will take no damage on the second shot as well, virtually guaranteeing they will come out with full Health.

Playing Against Double Attack in Legends of Runeterra

Know that if you're going against Double Attack, odds are very high that your blocking unit will die. This means you'll have to trade down to defeat the enemy, or throw smaller allies into their line of fire to hold them at bay. You could also force them into a desperate Defense situation, where Double Attack has no effect. Your best bet is to use a removal spell to dodge the problem altogether. 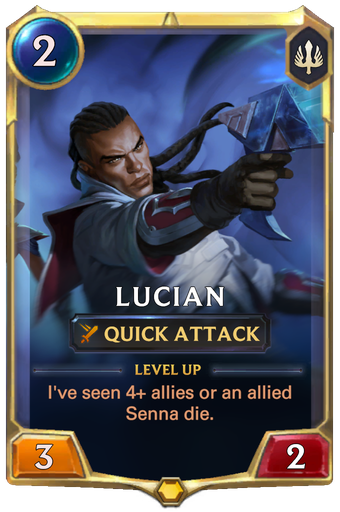 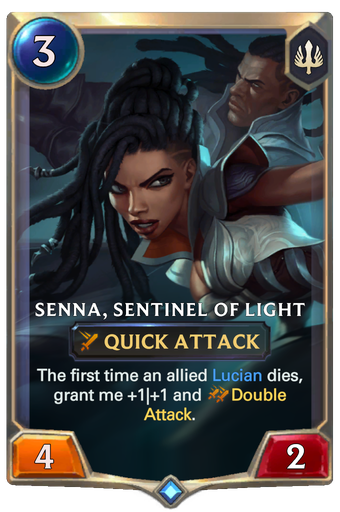 Lucian and Senna, Sentinel of Light go hand-in-hand, a fitting combination for a married couple IRL (in real Legends?). They pick up the gun of their lost beloved, upgrading their Quick Attacks to Double Attacks. Double tap; always remember to double-tap!