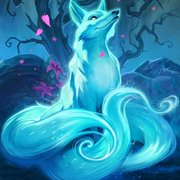 Hey i'm Brandon, and i am a hearthstone player, and my favorite classes are (Burgle) Rogue, Mage, (Control) Warrior, (Non aggro) Warlock and Blood DK.

The type of decks i enjoy the most are: (Burgle) Rogue, Hero Power Mage, WILD Casino Mage, Renolock, C'Thun, the Shattered decks, most highlander/reno decks, and now i also LOVE triple blood DK. I really enjoy these types of control decks!

I started playing Hearthstone during Naxramas, but stopped playing for a long time. (Because i found the game too p2w back then) When i was watching blizzcon (because i played a lot of Overwatch at the time) i saw the Cobolds & Catacombs Dungeon Run being announced. Because of that i gave HS a second chance and i was hooked ever since.

Considering i love playing a wide variaty of decks, i used Hearthpwn to look what other people came up with (Mostly fun looking Off-meta Decks). But as this website is a way better HearthPWN and continues to be improved. Also it has the (Pretty much) same awesome Mod Team, so i gladly switched over when Outof.Cards first launched! You might not see me comment too much, because i'm a bit shy and prefer to "lurk" around, but i gladly take part in discussions about new cards, theory-crafts, and sometimes some other discussions when i find them interesting. Also i generally don't post my decks, but if i do it's only when i truly think it's something others would enjoy. Despite calling myself a lurker, apparently i am the #5 top commenter in 2021, with 858 comments. Which i find kinda ironic lol.

I love playing FUN decks, and i really like playing RNG decks because it always keeps the game exciting. However i really dislike/hate RNG decks that are just "hey let me slot in every removal spell/minion ever and generate infinite value from 1 card". A true FUN rng deck i.m.o. is a deck that is both fun to play, and fun/not that big of a bother to play against. (And it must include some bad cards like Spellslinger, or the The Amazing Reno into Grizzled Wizard into Sideshow Spelleater combo, to allow your opponent to have fun as well. It aint fun unless your both having fun.) I also only like RNG as long as it has about an 50/50 chance to get something good or bad. I HATE it when RNG discover options are only good. It only removes the excitement about not knowing what your going to get, and it feels bad to play against.

Another thing is that i love to try is making bad/unpopular decks like Ashes of Outland Libram paladin work, but once they become good/meta i often hardly play the deck and move on to another bad archetype. Mainly because i feel bad playing the deck when it's meta, because i don't want to be a "meta slave". Why can't bad archetypes get buffed when a new set launches into a good/mid tier 2 deck, instead of an over the top dominating tier 1 deck? :(

Finally reached Legend for the first time on the 30th of April 2022 using Control Dragon/Naga Warrior. I reached my 2nd time legend on the 29th of December 2022 using a combination of Triple Blood DK and Aggro mage.