Legends of Runeterra dropped a pretty big bombshell out of nowhere. They just posted the roadmap for the game for the next few months, and it includes some very interesting stuff, like the rest of the Darkin Saga, plus a little thing called CARD ROTATION! Let's get into it!

Dave Guskin also announced that an AMA would be happening next week, although no specific day or time was given.

Here's that roadmap we promised! We want to loop you all into the conversation about future stuff earlier, to help us shape the future of LoR together! I'll be hosting an AMA next week to go into more detail on what we have planned. Stay tuned! 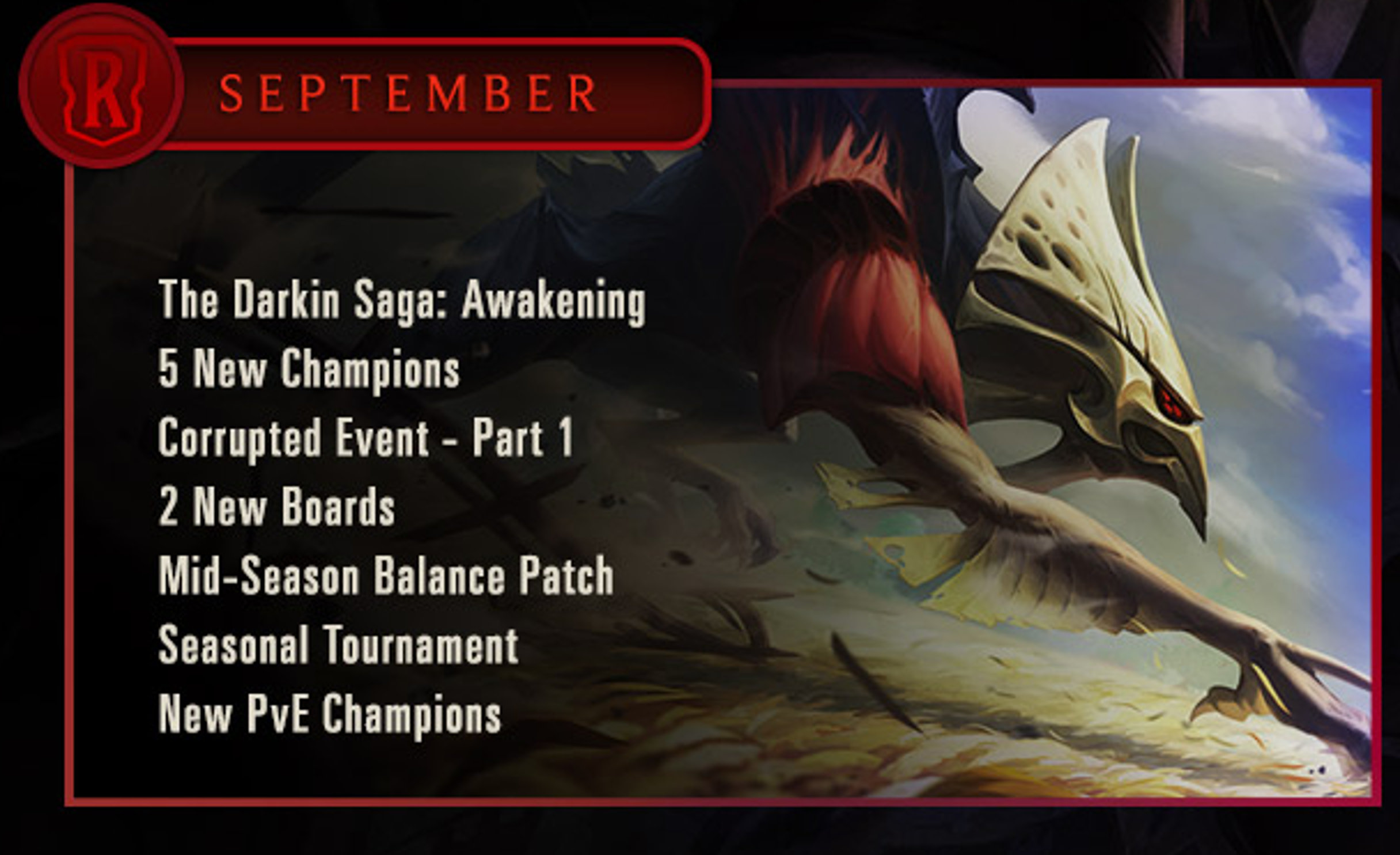 This is where we are now. Not much interesting happening here, since a good chunk of the items listed have already come to pass. The two biggest exceptions are the Mid-Season Balance Patch and the Seasonal Tournaments, which should be happening soon. There could also be some more champions added to PvE aside from those that came with Awakening. 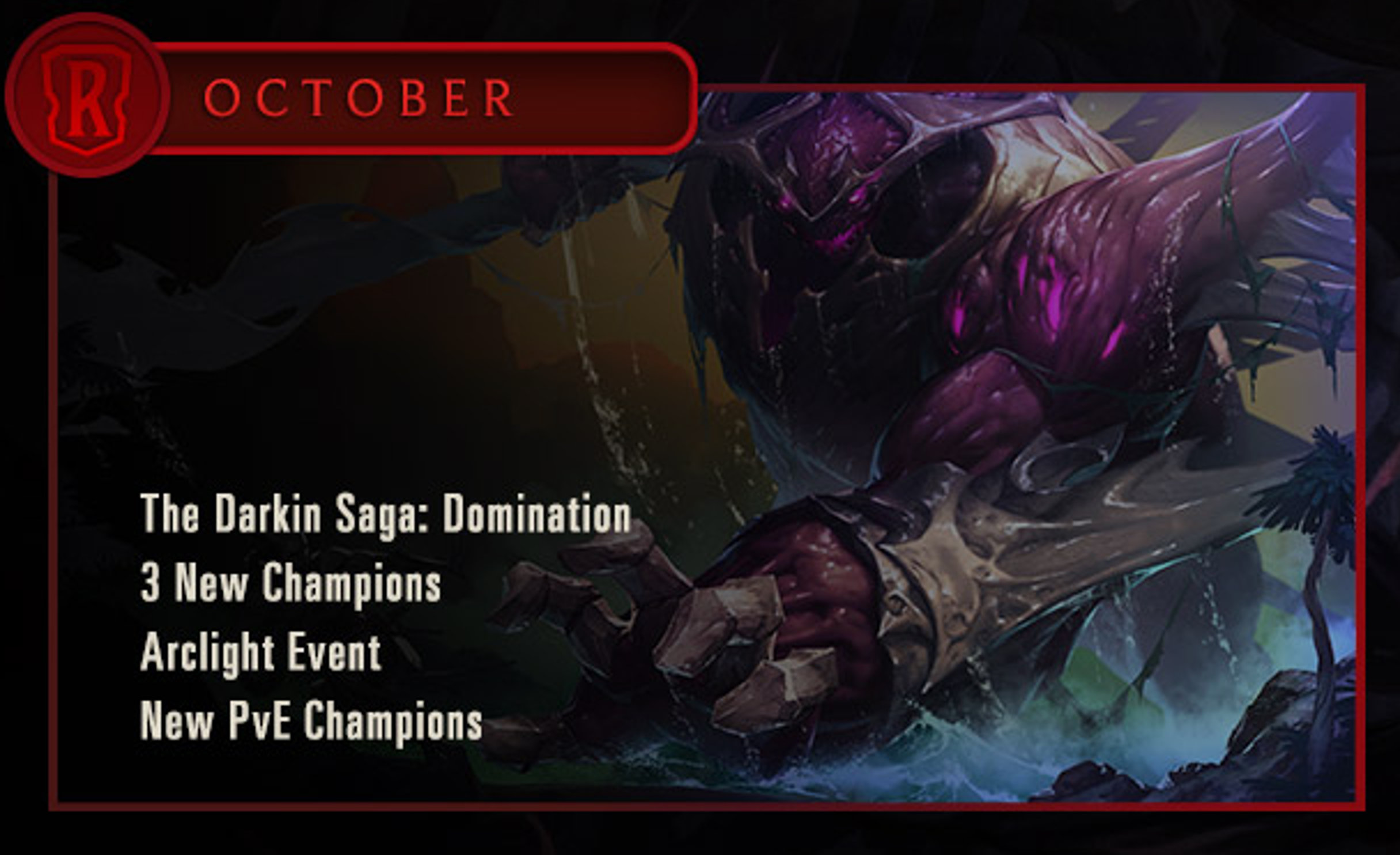 This is where things get real interesting! The next part of the Worldwalker set (which the entirety of the Darkin Saga is part of) is coming out next month. If we were to guess, it'd be near the end of the month, so that things are spaced out evenly. All we know is that 3 new Champions will be added, as well as more of them for the PvE mode.

We can make an educated guess as to who some of the Champions are. First of, when The Darkin Saga was revealed, we mentioned that there are 3 Darkin champions un LoL, and we can assume all of them will be Runeterran in LoR. We already have Kayn, so we'll likely get Varus or Aatrox in this set.

The slide also mentions an Arclight event happening. None of the current LoR champions have Arclight skins in LoL, so we'll likely see some exclusive skins. However, both Varus and Aatrox have Arclight skins (the latter in the Justicar subline). There's also Vayne, a Demacian, which is a region that still hasn't received a Champion in Worldwalker, and Vel'koz, a potential Runeterran Champion, both with Arclight skins. 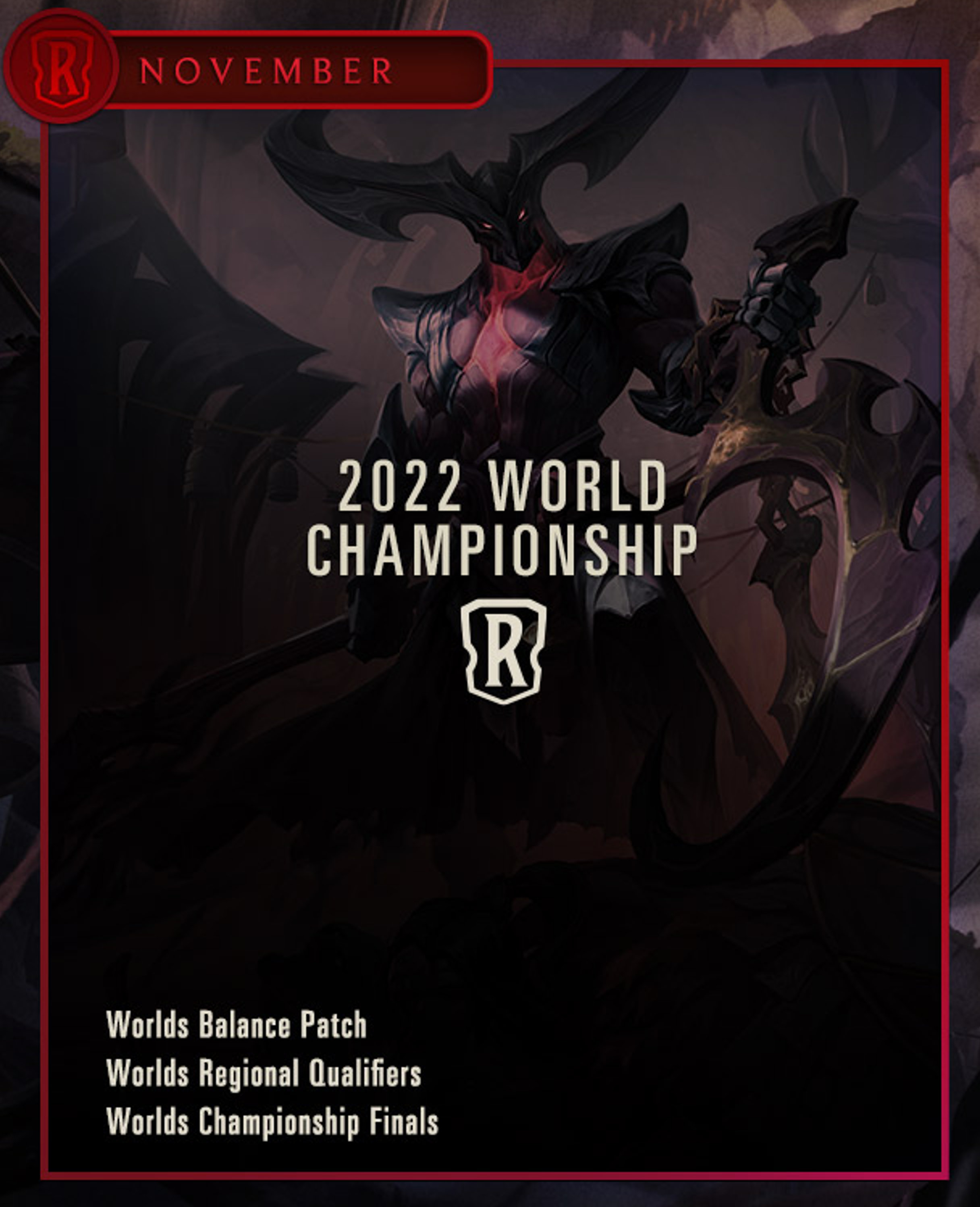 An exciting month for those who keep up with the esports side of the game, as this is when the Worlds Regional Qualifiers and the Championship Finals. Otherwise it'll be a quiet month, aside from a balance patch. 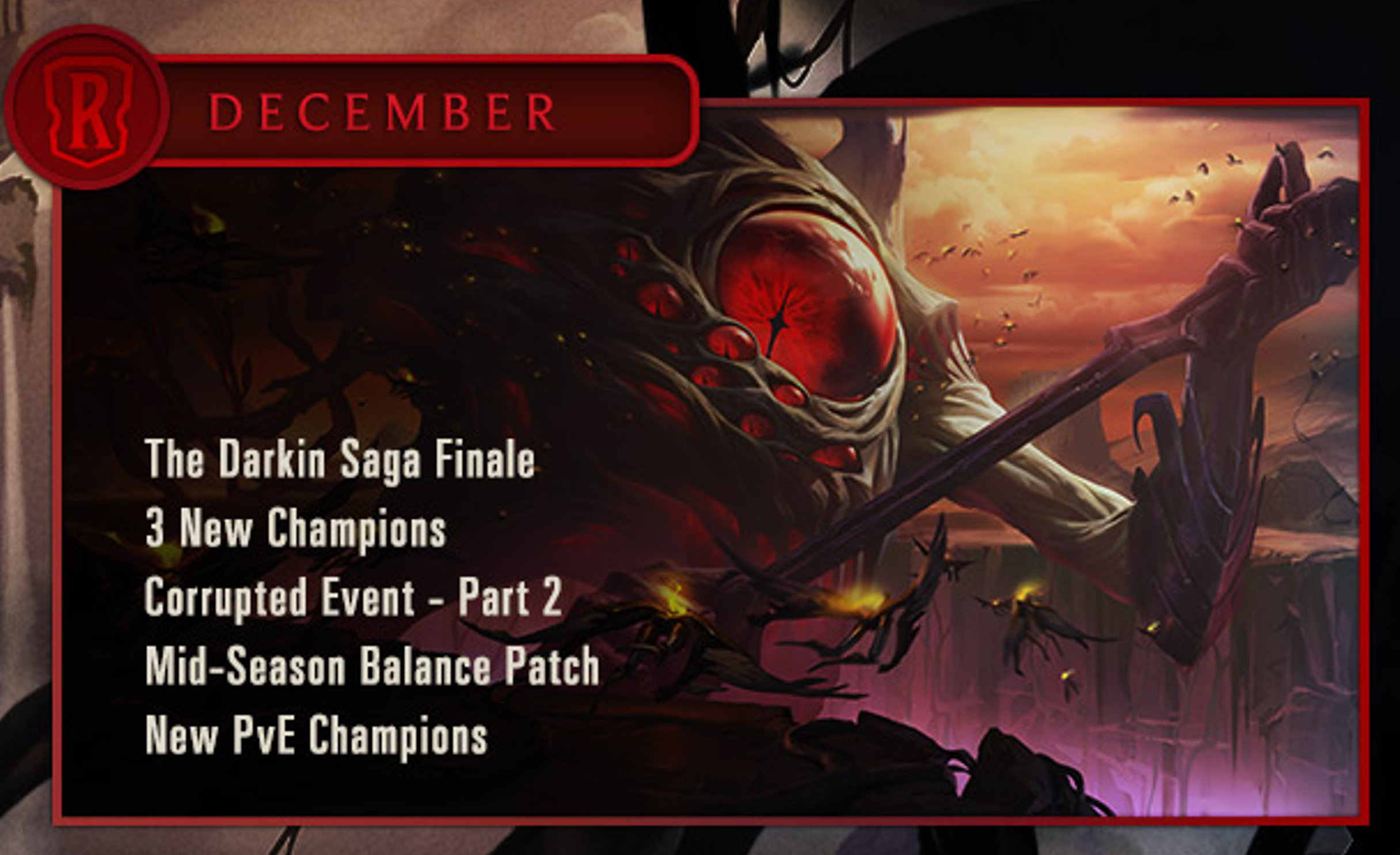 The final month of the year also brings the final part of the Darkin Saga. Again, this will have 3 new Champions for us the play with and some new ones added to PvE. We'll also get the second part of the Corrupted Event, meaning potentially new skins (we're hoping for Corrupted Teemo), plus a balance patch likely afterwards.

This looks like a good time to talk about region Champions. There's 3 regions without a Worldwalker Champion as of writing: Demacia, Piltover & Zaun, and Targon. If you do the math, that's 3 Champs, while this and the October set promise a total of 6. This means we'll get 3 new Runeterran champions by the end of the year. Two are basically guaranteed to be Aatrox and Varus, with a possible third being Vel'koz, though Kassadin is also speculated.

Here's the interesting part: Targon is out of Champions in LoL. However, since they didn't mention an original one in the post, there's a chance they take someone unassociated and put them in Targon, like they did with Malphite, probably Kayle. We already predicted Vayne for Demacia earlier, but there's talks of Sylas arriving, so he's also a possibility. As for who the P&Z representative might be, there are rumors that Seraphine will make an appearance. 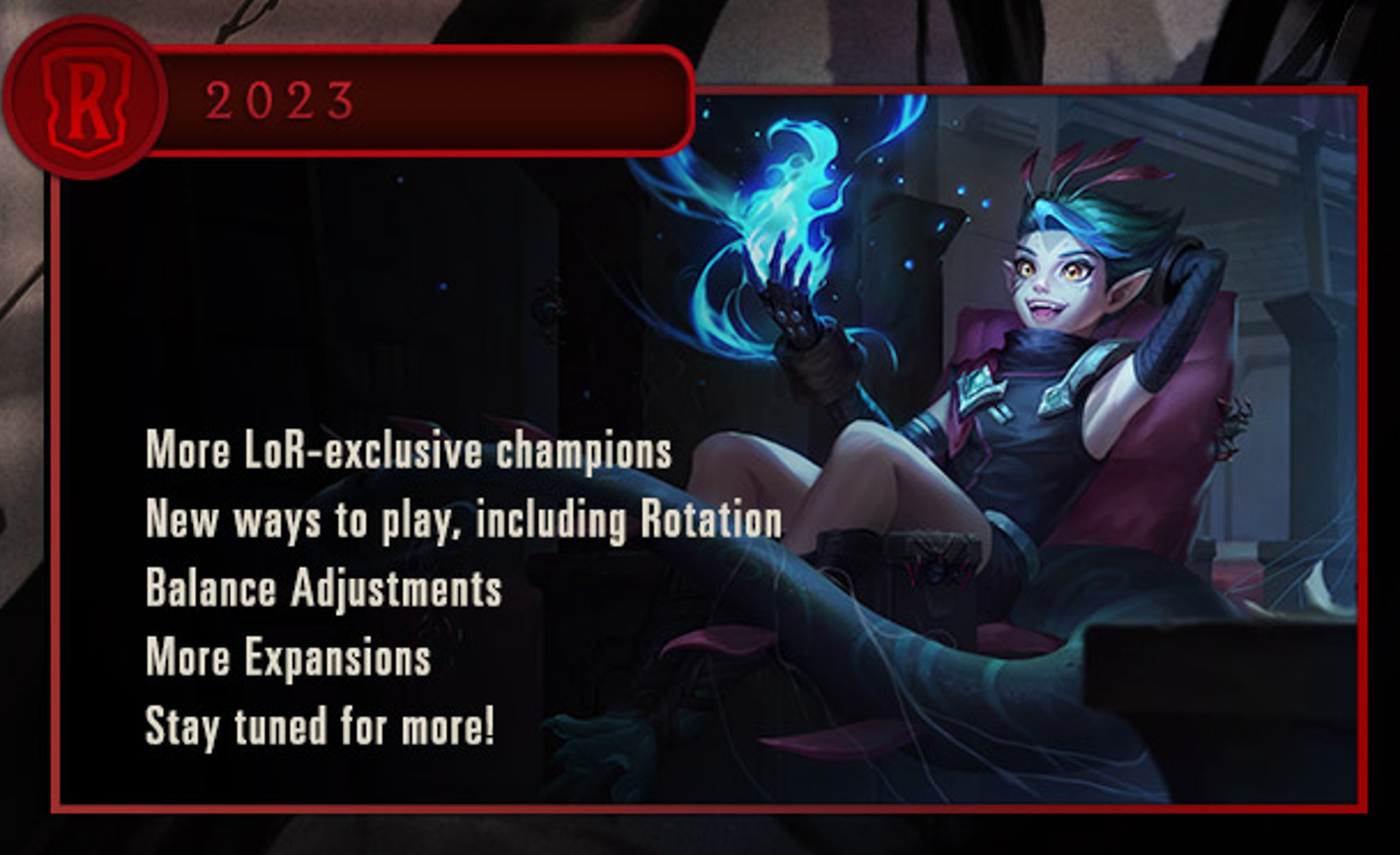 Finally, we have a glimpse of what's to come next year. The slide is pretty vague, only mentioning very obvious stuff, like more expansions and balance adjustments. However, there are two things that really caught our eye.

The first is the mention of more LoR-exclusive Champions. This was an inevitability, as Legends of Runeterra churns out Champions at a far greater rate than League of Legends. In fact, Targon is already out of LoL representatives, and they don't have any for Worldwalker as of writing this article.

The other big deal that was mentioned without much fanfare is new ways to play, including Rotation! For those uninitiated, this means the game will be split in (at least) two modes, a "standard" one, where a select number of the most recent sets are used, and another where you can use any card in the game. We'll have to wait and see how LoR handles this.

As summer ends, The Darkin Saga begins! Check out the Roadmap that brings us to the end of the year (including a peek at 2023!) Keep your eyes peeled for more info soon! 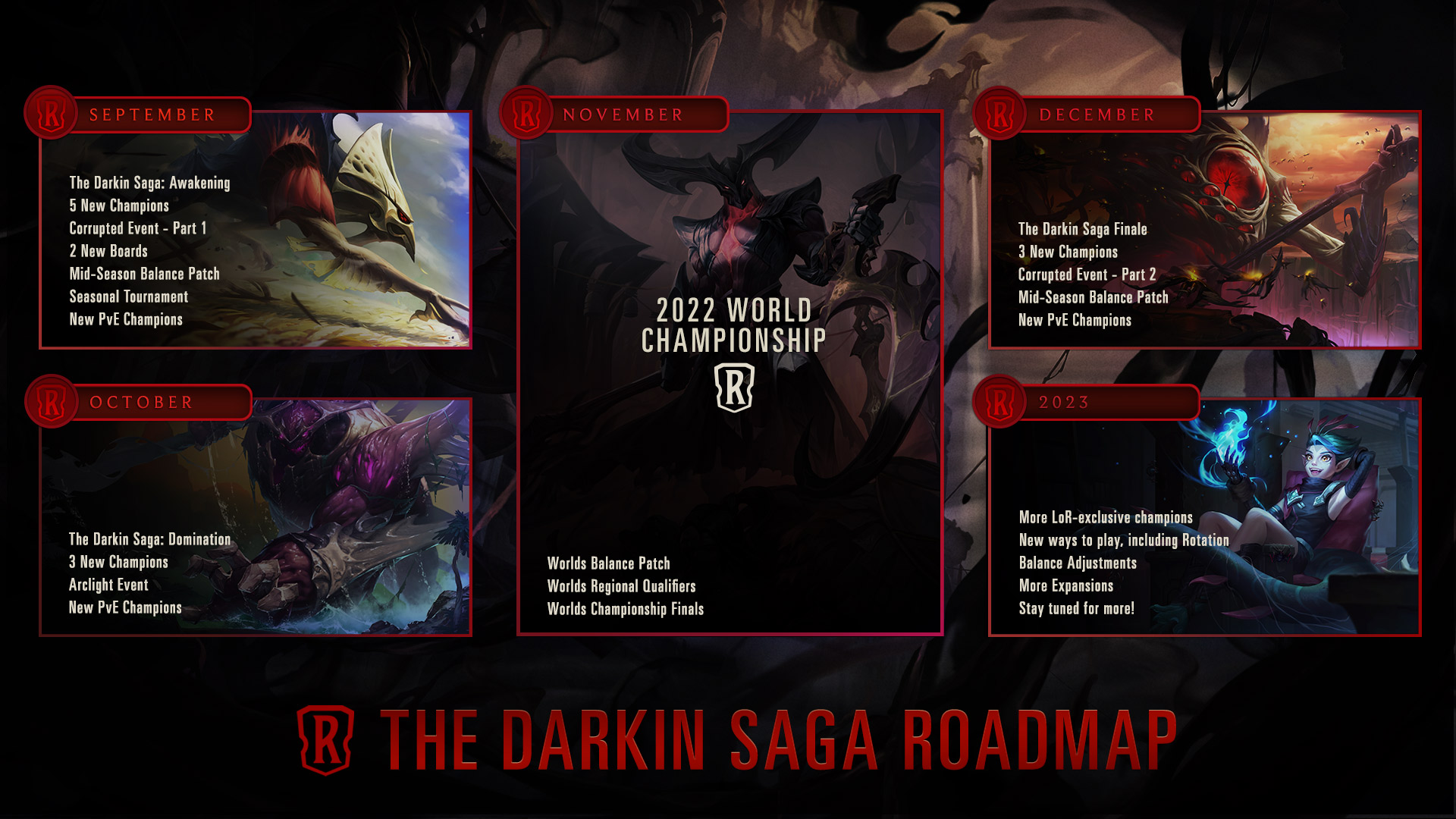 What are your highlights of the roadmap? Let us know in the comments below!