Sorry, we couldn't also shove League of Legends in the title. In an odd turn of events, it looks like World of Warcraft will pay tribute to the Yu-Gi-Oh card game in its upcoming Dragonflight expansion. This information comes from WowHead, and it's for a game still in beta, so things might change by the time the full game comes out.

Here's the basic gist of it: Yumadormu and Setogosa, draconic students at Algeth'ar Academy, are arguing over a deck of Hearthstone cards. At one point, Setogosa throws the deck in a river, much to Yumadormu's displeasure. Thankfully, the latter is a Bronze Dragon, so he can just get the cards out of the river and can reverse time to undo the damage. 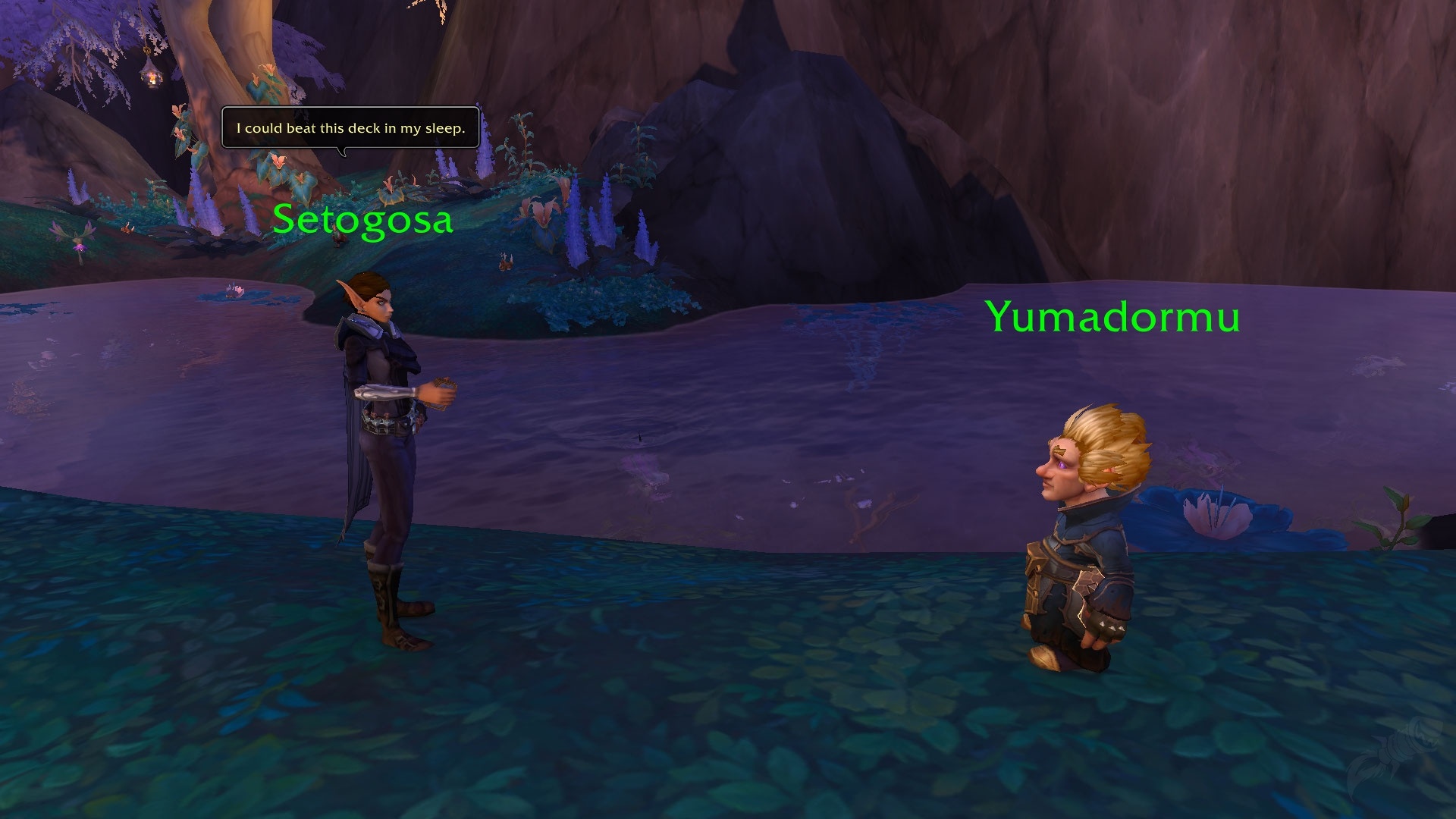 Let's take a look at the references so far. Setogosa, a female Blue Dragon, is clearly a reference to Seto Kaiba, antagonist-turned-rival of the original Yu-Gi-Oh! Duel Monsters anime series. Her action in this scene line up with how Kaiba would act at the start of the season, and it fits even better with his Season 0 characterisation.

Yumadormu is... a bit of a headscratcher. The way he acts, the spiky hair, and the antagonism with Setogosa fit with Yugi Muto. But the name and the fact that he uses a Warrior deck seem to be a reference to Yuma Tsukumo, the protagonist of the Zexal anime, who has nothing to do with Kaiba and doesn't have any Dragons in his deck.

The action of cards getting thrown in the river is also a reference to a pretty famous scene in the anime. Yugi and a recently introduced character, Weevil Underwood, are sitting on a cruise ship, when the latter asks Yugi to take a look at his Exodia cards. Then he throws them in the ocean. Unlike in WoW, the cards are never seen again.

Lastly, and this is likely just a coincidence, the existence of Algeth'ar Academy (where this whole thing happens) lines up well with Duel Academy from the GX anime. Even the color of the uniforms worn by the two characters match a little with the ones for Obelisk Blue and Slifer Red.

Moving on with the quest, after Yumadormu gets his deck back, he wants your help in starting a Hearthstone club (making the previous Duel Academy connection stronger). After you get enough people in the club, Setogosa returns and ruffles Yumadormu's feathers scales, leading to a duel of Hearthstone.

Screenshots of the game show Yumadormu summoning a Town Crier, while Setagosa brings out a Mana Wyrm before cheating and summoning White-Eyes Blue Dragon. Prevent the cheat and help Yumadormu win the game to finish the quest. 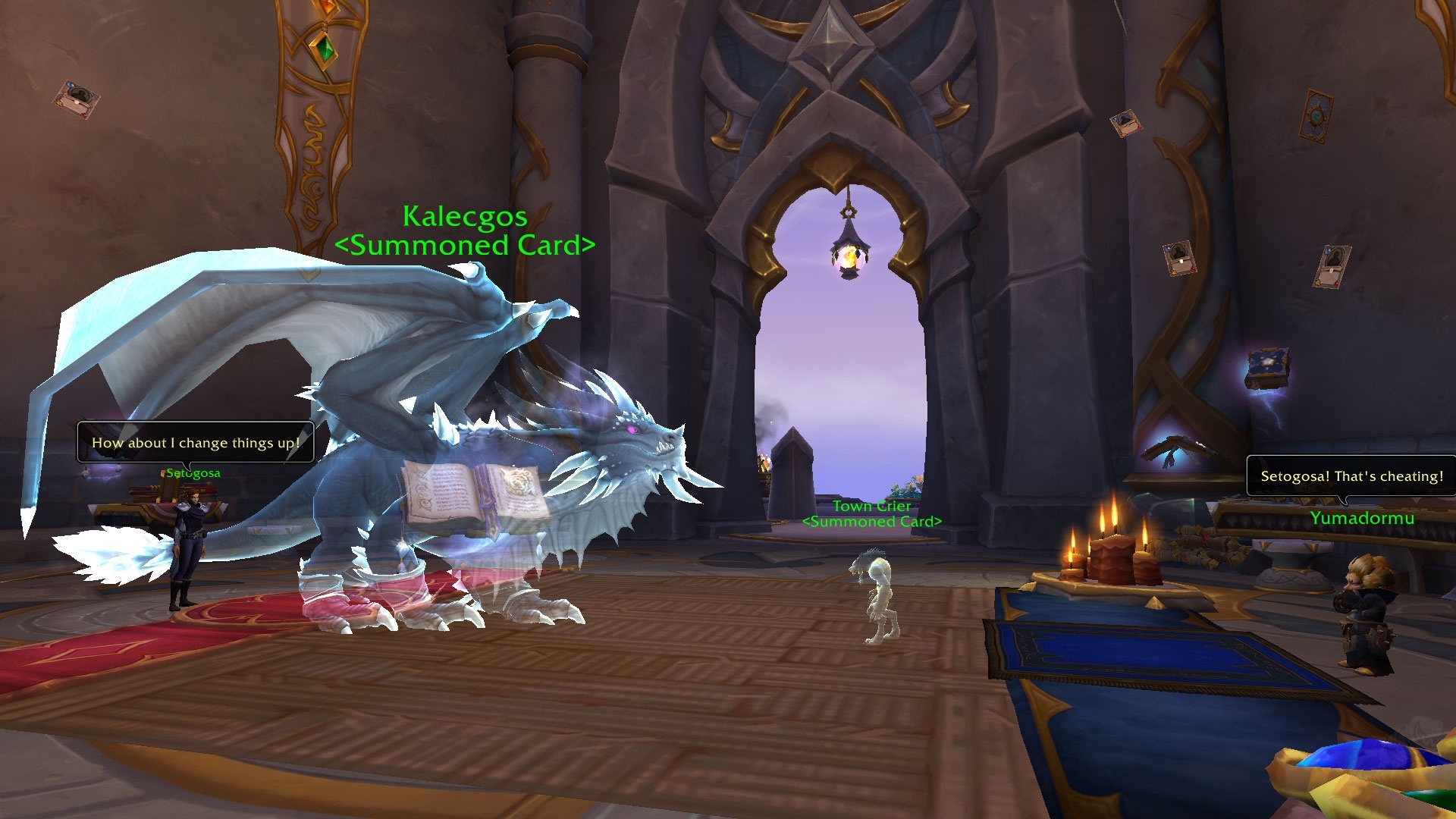 Now, the question is, why make a quest like this? It's possible this is just the devs having a bit of fun, but there's possibly another reason. A couple of months ago, Kazuki Takahashi, the creator of Yu-Gi-Oh, sadly passed away. It's possible that this questline was created in order to honor his memory.

What do you think of this WoW quest? Would you like to see more quest in this vein in the game? Let us know in the comments below!