MARVEL SNAP's newest featured location, Rickety Bridge, has inspired an assortment of strategies so far, and there's still plenty of time to take advantage of its increased appearance. With that in mind, we've gathered some decks from the SNAP community that play well with Rickety Bridge for players at every level of Collection: from the very beginners to those near the end of Series 3 and beyond. 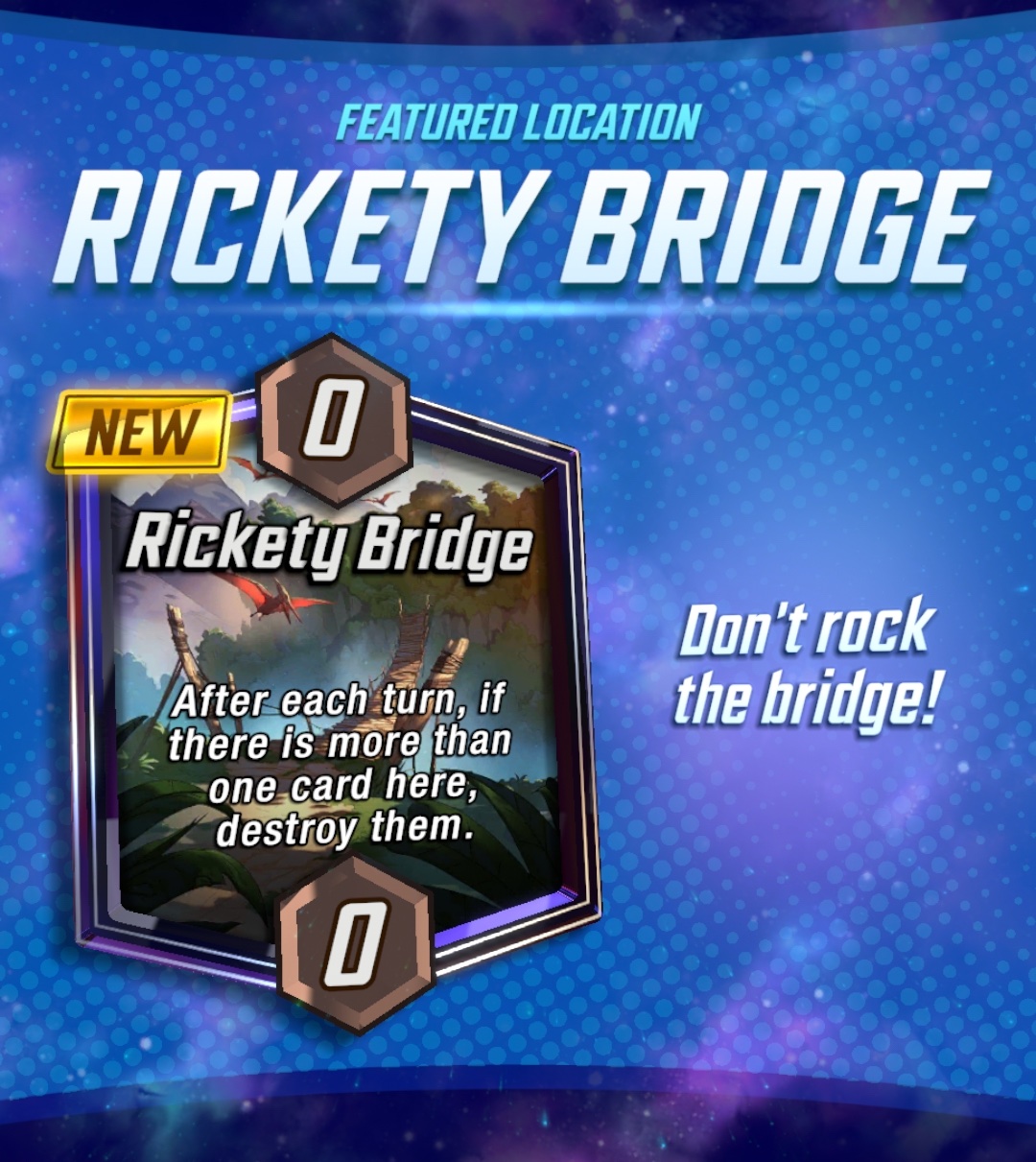 As a Featured location, Rickety Bridge will have a 40% chance to appear for 48 hours, from 7 PM PT Tuesday night to 7 PM PT Thursday night (2 AM UTC Wednesday to 2 AM UTC Friday) - that gives us just enough time to try out these decks that want to see it more often.

The budget recommendation for this week is Ongoing Spectrum, which has a lot of cards that can help you win the Rickety Bridge. Klaw and Mister Fantastic add Power to the location without risking their bodies. Meanwhile, Colossus gets to act as bridgekeeper; you know, asking three questions and all that.

Like our Series 1 recommendation, we have a Series 2 Ongoing list that should do well with the Featured Location, especially since Series 2 gives the deck access to Warpath, meaning you can avoid playing into the Rickety Bridge and be rewarded for it.

Another option for Series 2 players is this Devil Dinosaur deck that tries to control the other locations with big Power and removal, while using Armor and/or Colossus to win the Bridge. If that doesn't work, using Storm to clear the Bridge is another option. We're also running Sabretooth to potentially take advantage of the featured location.

Yes, it's another Ongoing list, which should tell you how highly we think of cards like Mister Fantastic and Warpath with regards to the featured location. Thanks to Series 3, this deck has the option of playing a big stack o' Power in Destroyer on the final turn.

If you're feeling particularly mean, you can mess with your opponent's game plan by playing a Control deck designed to destroy all their cards on the Rickety Bridge. Destabilize them with rocks from Debrii, shift the locations with Quake, or just pull four cards from their hand to the bridge with Doctor Octopus. The only way they can stop you is by knowing the difference between an African and a European Swallow.

Our final deck recommendation is a Series 4 Death deck that can make a big Deadpool thanks to the Rickety Bridge, then copy his Power with Venom and Taskmaster. We're also running Angel to thin our deck, and Doctor Octopus to thin our opponent's hand.

Have an opinion about the featured location? Let us know in the comments!