MARVEL SNAP's newest featured location, Collapsed Mine, has inspired an assortment of strategies so far, and there's still plenty of time to take advantage of its increased appearance. With that in mind, we've gathered some decks from the SNAP community that play well with Collapsed Mine for players at every level of Collection: from the very beginners to those near the end of Series 3 and beyond. 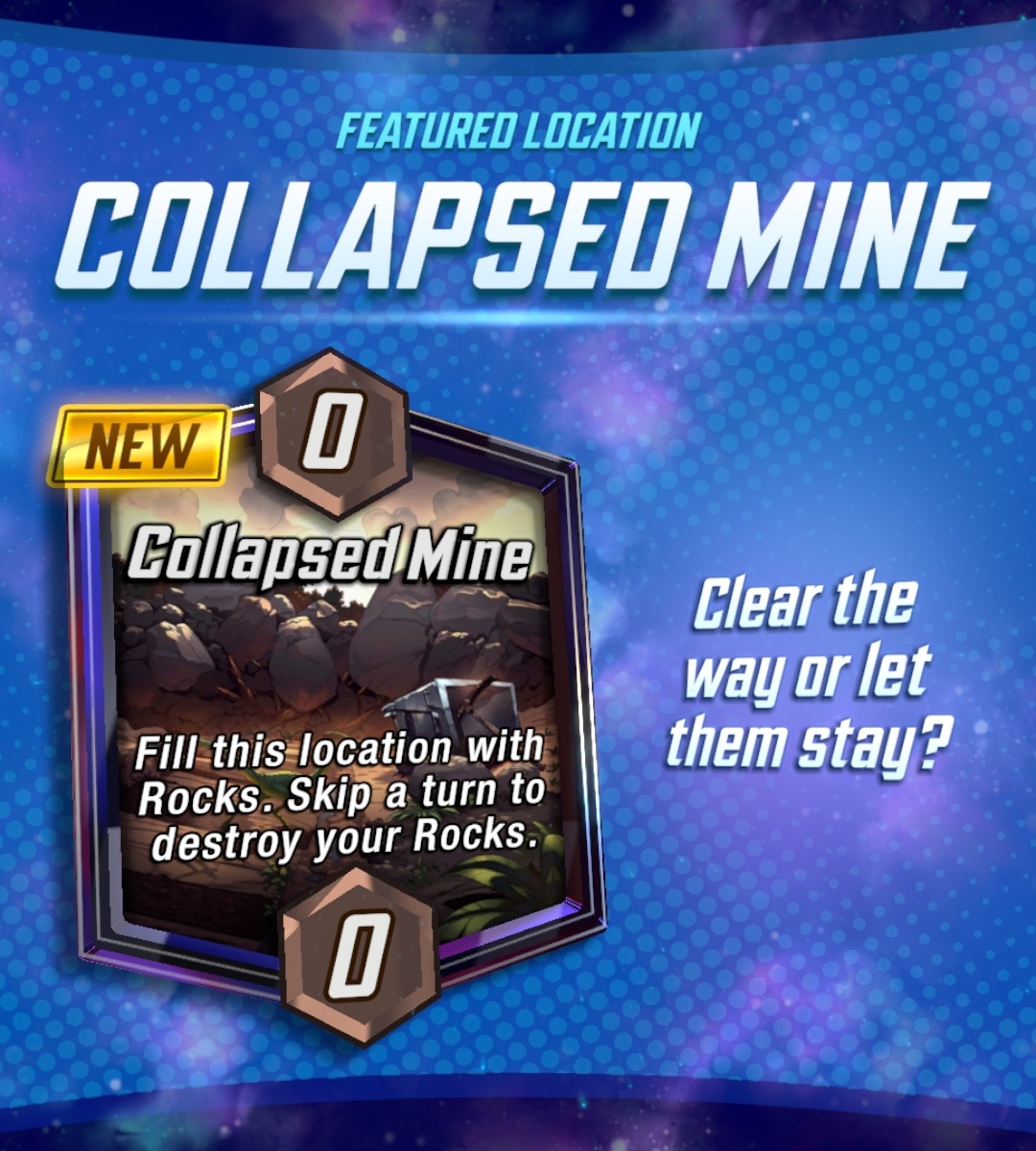 As a Featured location, Collapsed Mine will have a 40% chance to appear for 48 hours, from 7 PM PT Tuesday night to 7 PM PT Thursday night (2 AM UTC Wednesday to 2 AM UTC Friday) - that gives us just enough time to try out these decks that want to see it more often.

At first blush, Series 1 doesn't look to have any cards it can use to take advantage of the featured location, but looks can be deceiving. The oft-maligned Uatu the Watcher is perfect for this featured location, giving you information ahead of time about when and where Collapsed Mine will show up. Perhaps you'll be able to drop an Armor to the Mine before it reveals, and lock your opponent out of the location. The rest of the deck is a pile of good Ongoing cards, with Spectrum as finisher.

If you're skipping turns, then the best two cards from Series 2 that you can run are Sunspot and The Infinaut. This big deck can cheat out large bodies with Jubilee, and has no problem sitting out an early turn to clear out the Mine.

This Tempo deck from Second Dinner's Tian Ding is perfect for skipping the penultimate turn, clearing a spot at the Collapsed Mine just big enough for The Infinaut to jump right in.

Once you're deep into Series 3, you might have access to Death, one of the best cards to use to abuse this location. This deck takes the traditional Death Wave synergy and adds in a Collapsed Mine twist with The Infinaut - and it runs Leader to steal your opponent's final turn, too.

If you're more interested in stopping the Wave of Death decks, you can try this counter deck from Alexander Coccia that runs plenty of permission cards that keep the opponent honest, and also has the space for things like White Queen and Leader to steal their best stuff. Or you can try to discard their Death with Black Bolt.

If you're further along on your collection journey, you might have the cards for this Shuri deck from TLSG that makes big bodies with Wong and the aforementioned Shuri; and doesn't care whether those big bodies are She-Hulk, or the not-to-be-underestimated Wasp.

Have an opinion about the featured location? Let us know in the comments!

MARVEL SNAP's Featured Location This Week is Collapsed Mine - Those Aren't Yours!