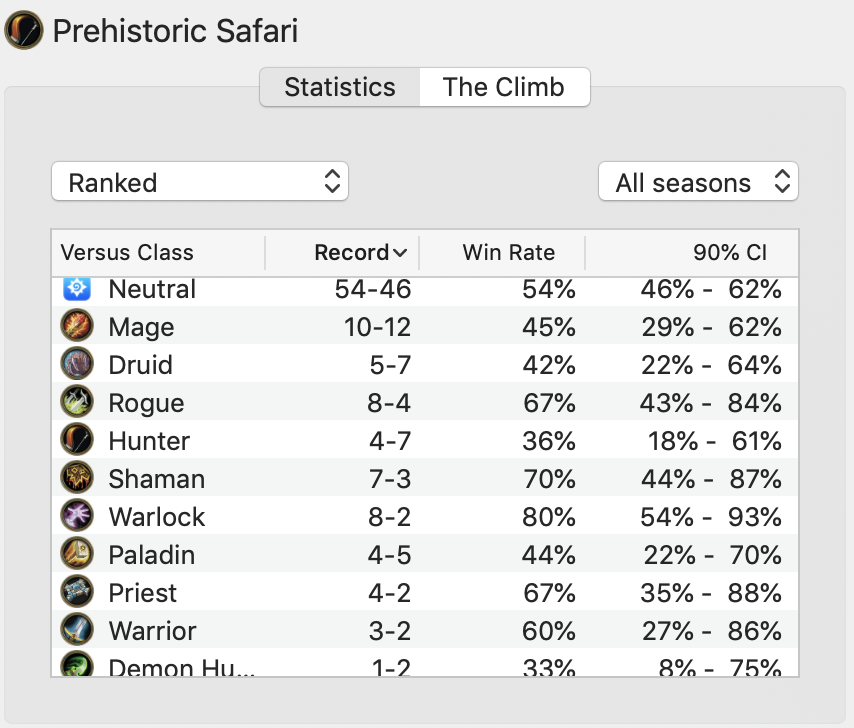 I played 100 games in diamond mmr in Legend to test this deck, and it has a winrate of 54%.

I crafted Gahz'rilla about a week ago and am trying to make different fun and semi competitive decks with it. I have 3 deck ideas out of an initial 5 that seem either fun, semi viable or both. The first deck I already posted, it's Prehistoric Stampede which is more of a fun meme deck with low winrate that has a lot of nice interactions with big beasts. This is the second deck of the series, a deck with an aggressive beast core with a lot of card draw that can win through aggression but also has a fun Gahz'rilla otk finisher. The third deck is going to be a Reno version that uses discover a beast cards to get the otk in hand very consistently, it's still in testing but looks promising so far. Depending on what new cards get revealed I might wait to try to include some of those in the reno version of a Gahz'rilla deck after the new expansion is released.

Against aggro: Use your 1 mana beasts into a Scavenging Hyena, Fresh Scent, or Crackling Razormaw on turn 2 to have a strong start and take control of the board. From there you can try to keep board control and push face damage or take it slow, remove all their minions, and eventually draw to and do your Gahz'rilla otk.

Against combo: Most combo decks in wild go off before you, so you need to be very aggressive. They often are low on removal so Scavenging Hyena can snowball very well. If they happen to not combo before turn 9, you can play your own otk to end the game.

Against control: Keep a lot of card draw in the mulligan, wait to get a lot of value out of Starving Buzzard, and then otk the opponent on turn 9 or 10. You can sometimes win with beast aggression but control will usually have the removal and heal to prevent this.

Due to the draw power of Starving Buzzard, the Gahz'rilla burst combo is ready by turn 9 very consistently, and you often win against slow control decks if they don't disrupt your combo with a Dirty Rat or Mutanus. The deck's worst matchup is aggro decks, which do make up most of the meta, but they are beatable if you can gain early board control with your beasts or swing back board tempo using Serpentbloom on a 1/1 rush beast or Dreadscale.

Demon Hunter - Mostly odd demon hunters, unfavored because of their burst and you have no taunts or heals. However, if you do win an early board you will be able to race them before they can burst you down.

Druid - Aggro druids are even, you can win if you get Dreadscale and Serpentbloom or early game board control. Combo druids are slightly unfavored, they can use Spreading Plague to shut down your aggression and often combo before you. However, if they don't draw Spreading Plague you often win. Try to not have overly wide boards against combo druids and focus on buffing a few beasts.

Hunter - Mostly even hunters, you are unfavored because their secrets often stop your combo and they just burst you down. The only chance is to get board pressure and win before then.

Mage - Unfavored vs secret mages, their secrets stop your combo most of the time and they can also outtempo your beasts. To win you need to get the board early and keep going face. Favored vs combo mages, you can often just win with early game board aggression.

Paladin - Slightly unfavored vs odd paladins, they have a lot of board pressure to destroy you before turn 9 but if you gain early board control or get Dreadscale you can win.

Priest - Very favored vs reno priest, you can just otk them before they do the same to you. Big priest is very unfavored because your otk can't go through their big taunt walls.

Rogue - Mostly kingsbane rogues, it's very favored because your beasts are good at gaining early board control against their pirates and then pushing face.

Shaman - Reno Shaman is a very favored matchup, you can just otk them pretty often. Murloc shaman is even, the Dreadscale and Serpentbloom combo is key here, try to draw to it as fast as possible as they often can't handle it.

Warlock - Reno warlock was a very favored matchup, you can often pressure them even without the otk combo and you can otk them turn 9 even if they do handle your early waves. Just focus on card draw and setting up the combo. Did not see a lot of other warlock archetypes but darkglare warlock should be unfavored.

Warrior - Odd warrior is a favorable matchup as you should be able to otk them for 48 damage and if you keep attacking with small beasts while drawing to get to your combo they shouldn't have too much armor. Pirate warrior is even, you need to try to get board control with beasts to win. 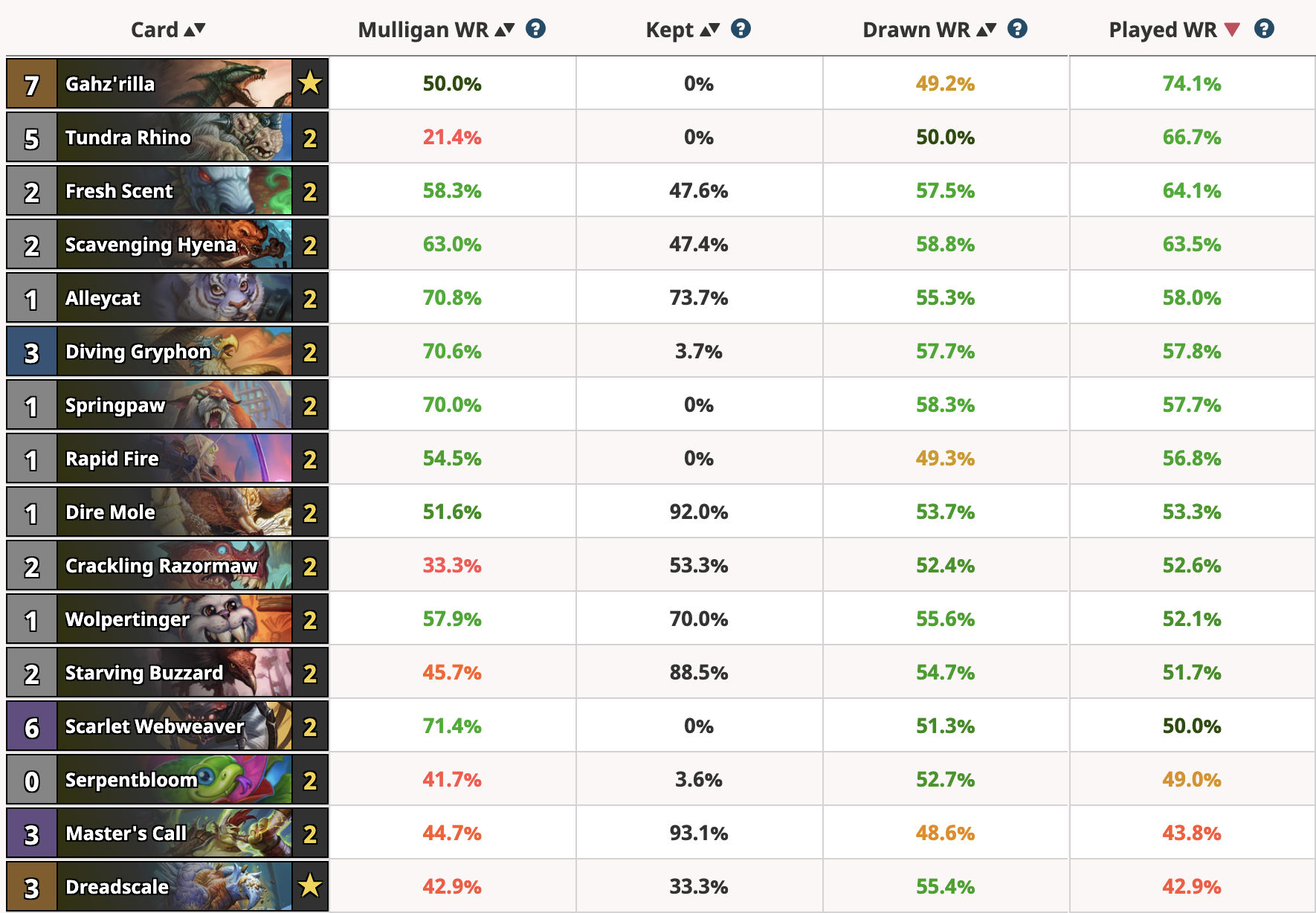 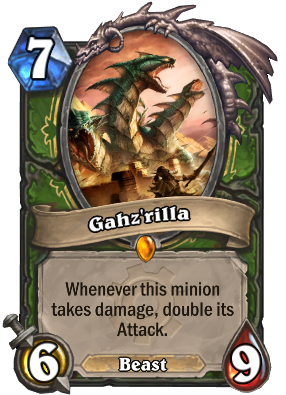 He can be used as a great finisher against decks that outlasted your early waves of small beasts, dealing up to 48 damage in one turn.

Notes about the stats: Dreadscale seems to have the lowest played winrate and not be a great card, but his winrate is shifted lower because you generally play him when you are behind so he is a card that can save you from losing about 40% of the time, which is pretty good. Also, I was initially keeping too many card draw cards in the mulligan which turned out to be really bad against aggro, and lowered the mulligan winrate of the card draw cards. If you only keep one card draw instead of 2 or 3 against aggro the mulligan winrate of those cards will be higher.

Keep Dreadscale against paladins and if you have Serpentbloom, in which case keep Serpentbloom too.

To execute the otk combo, you play Tundra Rhino and Gahz'rilla and then use Rapid Fires on him. Play it twice to get his attack to 24 on turn 9, or 3 times to get it to 48 on turn 10. With Tundra Rhino, that's either 26 damage on turn 9 or 50 on turn 10. You can almost always lethal on turn 9 due to hero powering and using beast aggression earlier which should have done a bit of damage.

Sometimes a taunt is in the way, you can use a 1 mana beast on turn 10 during the combo turn and Serpentbloom on it to destroy the taunt. You can also do this on turn 9 and use Serpentbloom on Tundra Rhino if the taunt has less than 5 attack.

Dreadscale and Serpentbloom is a great combo which will wipe the board each turn. Be aware that it will destroy your own minions as well, but this is ok as you can focus on drawing to your combo while it is on board. To help Dreadscale survive more after you did this combo, you can adapt him with Crackling Razormaw and use Fresh Scent.

Serpentbloom on a 1 mana beast including a Springpaw is a great way to deal with a big minion and gain tempo.

For Starving Buzzard draw turns, try to play it so that you can draw at least 4 cards with it, and more if against a slow deck. Also, sometimes it's better to keep Alleycat or Wolpertinger in hand for a few turns and play it with Starving Buzzard later since each of those will draw 2 cards. However, if against an aggressive opponent or if it is turn 1 against a non priest class then you should play one of those beasts anyway.

Scavenging Hyena can be fed the turn it's played by using rush minions like Springpaw and Diving Gryphon.

Tundra Rhino + small beasts trading into enemy minions + Scavenging Hyena can give you lethal, since you have 2 Tundra Rhinos don't be afraid to use one of them for tempo or swing turns. Even a Tundra Rhino and Scarlet Webweaver can sometimes be lethal after your beasts did damage early on.

This deck is an attempt to make a fun deck featuring Gahz'rilla that can have a decent winrate. A regular beast hunter without a Gahz'rilla otk package would probably perform better in terms of winrate, however having the surprise burst in addition to being able to win by pure aggression makes this deck enjoyable to play. Hope you enjoy this deck and post any questions or comments about it below.