We've got some sad news today for Hearthstone, Alec Dawson, one of the more communicative developers on the team, has left. 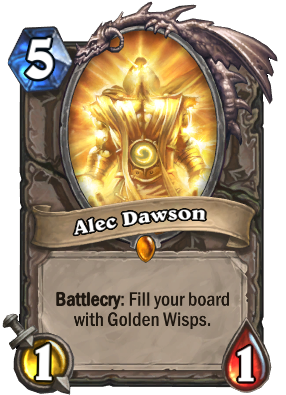 Alec stated in his tweet announcing his leave that he will still be working at Blizzard and has moved on to an "Unannounced Project" which will reunite him with some of his favourite people. Chakki and Gallon are going to be taking over communications for final design, so if you use Twitter, give them both a follow.

Alec started is journey at Blizzard back at the start of 2018 as a Game Designer, moving on up to Senior Game Designer last year and a Lead Game Designer back in March of this year. In his initial time at the company, he worked as a set lead for both Saviors of Uldum and Scholomance Academy before moving over to leading final design.

Before his time at Blizzard, Alec was a vocal member of the community, running the Golden Wisp podcast, starting all the way back in November 2014 and running for 156 episodes up until right before he joined the Hearthstone team.

Career Update: Today is my last day on Hearthstone. Working on Hearthstone was a dream but I’ve decided to chase after some new dreams. I’ll be joining an Unannounced Project at Blizzard and reuniting with some of my favorite people. Incredibly excited, so much to learn!

Lookout for future final comms from @Chakki_HS and @GallonHS. And lastly, just want to say thank you to the Hearthstone community. Working on this game was an absolute joy.

Where is Alec Going at Blizzard?

This "Unannounced Project" and Alec saying that he was going to be reuniting with some of his favourite people makes us think this is the same project that Mike Donais, Peter Whalen, and the recently departed Conor Kou are all a part of.

Those folks and all their other team members must be cooking up something good. It'll be interesting to see if their project ever goes public, since not everything Blizzard creates does.