Appearing unexpectedly along with the latest shop bundles, a new special 'legendary' quest for Hearthstone has already caused quite a bit of confusion within the community. Is it supposed to be a part of a larger quest chain? Has somebody on the team accidentally pulled the wrong lever while locking out any immediate follow-ups? Why just now, and is a single Castle Nathria pack all we are going to see?

Turns out it's nothing of the sort and it was apparently all planned, strange as it might seem with the curious timing and just as a one-off Quest. We've since learned at least a little bit more about the context:

was the infuse quest that awards a nathria pack supposed to go live today?

Yep, it was supposed to go live today. There’s one more that is expected next week, too.

Are they doing one a week for awhile? I figured they had finally turned on the series we usually got on launch day.

There are just the two.

So there you have at it. And hey, at least it's a free pack, with another one on the way. You didn't expect Sire Denathrius (or his spirit) to be overly generous, now did you? The precious anima doesn't get hoarded all by itself. 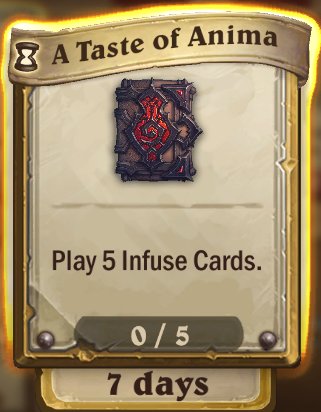 Not quite a "blink and you will miss it" kind of deal, but the usual rules apply - special quests now have a limited duration, so after the time is up it will simply get replaced by the next one. But since the requirement is very simple and could be done pretty much in an instant, nobody should find it difficult to complete. As always with these type of quests, it takes up its own 'legendary' slot and doesn't take away from the regular three daily options.

May you find some fine cards in your gifted pack! We'll be keeping an eye out for the next offering.