Today we're seeing 5 cards that have been with us since the beginning of Hearthstone move away from Standard and into the Hall of Fame. Here are our thoughts on the rotation and decks we've used with them.

Oh, except for Mind Control Tech - that card can burn in a dumpster. 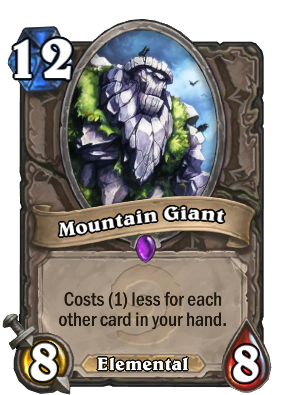 Out of all the inclusions in this year's Hall of Fame announcement, Mountain Giant is one that I saw coming for a long time running now. While it usually stands in the sidelines, once in a while it comes out to shine and is usually a gigantic thorn in a meta. Whenever Mountain Giant is playable, it is almost always being abused to cheat it out on turn 3 or 4. The two most recent cases that I can remember of Mountain Giant being a force to be reckoned with is during Rise of Shadows in Conjurer's Mage, where you'd flood your hand with either Book of Specters or with Mana Cyclone, get a giant on turn 4 or turn 5 then Conjurer's Calling it to create a massive board. The other case is with Evenlock, which could fairly consistently get a turn 3 or 4 giant which would beat down the opponent before they get the chance to clear it. While I would argue this is a fairer approach than what Conjurer's Mage used to do, it is still hardly a fun scenario on the receiving end.

This brings us to today, with Mountain Giant completely out of the meta once again. It feels a lot like the same treatment Coldlight Oracle received a while back. It was less the card being busted in the current meta and more just that it lends itself to unfair strategies too easily.

As mentioned earlier, Mountain Giant is pretty out of the meta at the moment, and so what better deck to feature the card in than one that has been out of the meta for its entire existence, Introducing, Hand Aggro Paladin, probably the most concerning combination of words I've ever heard as well as a decklist that made me sick the first time I looked at it. While I usually like to feature decks that I have created myself, as it is what I find the most enjoyable in card games, the list provided comes from JambreHS, and although the deck being created all the way back in Ul'dum, it still works shockingly well. 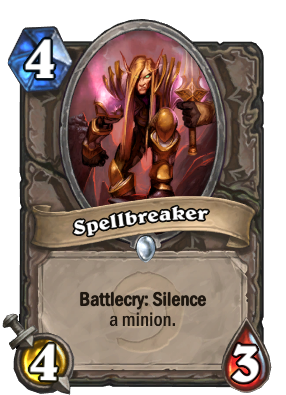 Ever since Ironbeak Owl got hit by a nerf-hammer, Spellbreaker was the go-to silence tool for many decks. With every new expansion, there seem to be more and more powerful effects that you just wish you could get rid of at the right time, so restricting the options with removing one of the only two unconditional neutral silence options does not feel very good.

Owl will probably return to its former glory replacing Spellbreaker in every deck that uses him as a tech right now rather than just filling that slot with a completely different card. In Standard anyway. I might be wrong though and maybe it will turn out that silence is just not worth 3 mana when the body attached to it is so weak.

Question is, what could be driving Blizzard to HoF Spellbreaker? Do they want to make room for wacky and powerful effects so players see them get activated more often? Maybe. Or it could be that they want to restrict the pushing power of fast decks since having a silence readily available means that a single Taunt does not mean much in terms of protection. That will not really change anyway, but every little bit helps, I guess? Or maybe it was a calculated decision with introduction of Kayn Sunfury? Who knows. Only time will tell if this was a right decision or not. If it turns out that a card like Spellbreaker is missing in Standard, they can always print a new one.

Speaking of fast decks, how about this Zoo-lackey-lock from Horus?

This Hall of Fame inclusion is based on some quite interesting motivations: rather than being an uninteractive combo enabler (Ice Block) or an awesome aggro tool (Doomguard and Leeroy Jenkins), Acolyte of Pain has been deemed to be a too good drawing engine card that all decks that need a fast cycle have included, despite their actual strategy. Borrowing Iksar’s words, “if you want to play a combo deck and you need to draw a bunch of cards, you’ll play a package of Acolyte of Pain, Novice Engineer and Loot Hoarder and every class shares it. For this reason, it’s hard to make new draw cards at a much higher power level of these ones, which are already fairly powerful. […] But not only that: this package is completely made of neutrals, which causes all the classes to play very similarly to each other. […] When you get to a critical mass where all you really need is this package of neutral cards for every class then it can make the game feel a little more stale.”

A perfect example of what Iksar tried to deliver is Galakrond Warrior, one of the best decks in Standard right now, belonging to a class in which card draw should be accessible but not particularly good. In this list (down below) Acolyte of Pain does overcome Warrior’s limitation at card cycling, since it synergizes so well with so many cards like Risky Skipper, Awaken! and Inner Rage, granting at least 2 draws and speeding up Galakrond, the Unbreakable's invoke process.
I was going to suggest you guys to play this deck, but since we all know Galakrond Warrior too well, let’s meme this up! Thijs has been playing some Legend [Hearthstone Card (Mecha’thun) Not Found] Warrior with the new Legendary Kael'thas Sunstrider as a finisher and, guess what, Acolyte of Pain covers a pitoval in emptying your deck.

Leeroy Jenkins, long have you plagued the game with your charging; we recently did a whole article looking at the mechanic and wondering about its future! While Kayn Sunfury shows that Blizzard hasn't quite given up on Charge yet, Leeroy finally bit the Hall of Fame bullet he's been dancing around since the idea first made its way to Hearthstone.

Leeroy Jenkins suffered from the problem of being too ubiquitous an option for any deck looking to deal some damage. Before his nerf, he was for all intents and purposes a Fireball on a stick; the Whelps he summoned only really came into play if you somehow weren't killing your opponent that turn. Even pushed back to (5) there hasn't really been an aggressive deck out there that doesn't want a Leeroy.

A lot of Blizzard's choices with the Hall of Fame this time around show that they want to move power out of the neutral cards and into class cards. When a card like Leeroy exists, metas can often feel staler than they truly are, because any mildly aggressive deck will be running this one card; this problem is exacerbated by the fact that he's so frequently a finisher, so the last thing you'll see each game is often the same card.

Is Leeroy too strong a card? Not particularly, no, even in obnoxious Rogue decks which Shadowstep him. He straddles the line though; strong enough to feature in a few too many decks, but not so strong that you can really nerf him without killing him. In order to give Standard that breathing room to meaningfully change between metas, Leeroy had to charge into the Hall of Fame.

Speaking of Shadowstepping Leeroy, you know what's more annoying than that? When the Leeroy is buffed first, so you take even more damage! History Buff works fantastically with all the Lackey generation of Galakrond Rogue and makes Leeroy a real powerhouse to drop and close out a game.

What are your thoughts on the cards rotating out? Tell us about them in the comments below!

Year of the Phoenix Hall of Fame

New Hearthstone Arena Rotation and Duels Updates Are Due Tomorrow - Secure Your Tavern Ticket Refunds Before March of the Lich King Begins!