Is this finally the card that will make control hunter possible? As we’ve seen in the past with Raza the Chained and Shadowreaper Anduin, a free 2 damage ping whenever you do something is very strong, and even with a bit more of a restriction to only spells, Defend the Dwarven District has a ton of potential to be one of the meta-defining cards. That raises the question, does Hunter have the support to get this beast of a hero power online and abuse it or is it simply too slow, time to find out! 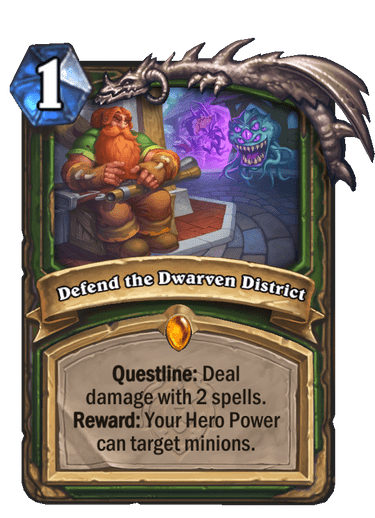 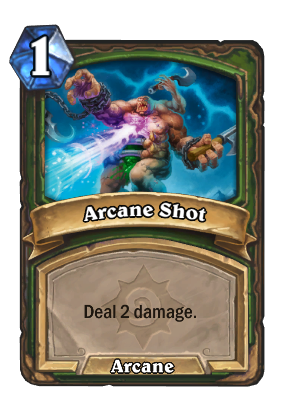 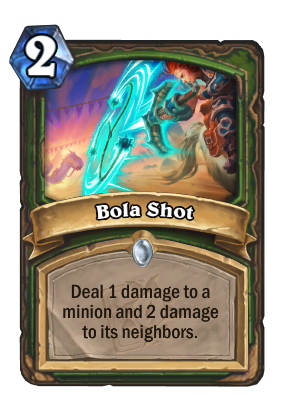 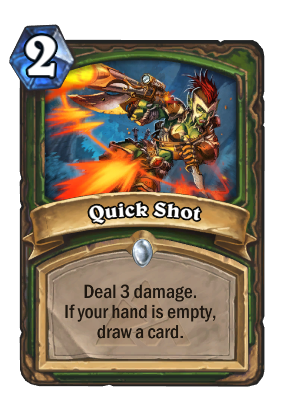 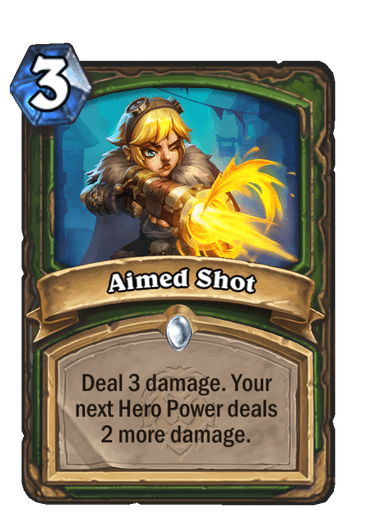 Due to hunter’s lack of draw and cheap efficient removal, it is fairly straightforward to calculate how fast we can reasonably complete this quest. With 14 spells that deal damage in the deck, there is a 62% chance to have two of them we can cast by the time we reach turn 2. This does not include Explosive Trap, which if it can trigger increases the chances to a clean 70%. All this means that we can expect to be finished with the first questline step by turn 3, which is a very fast completion of the first step. 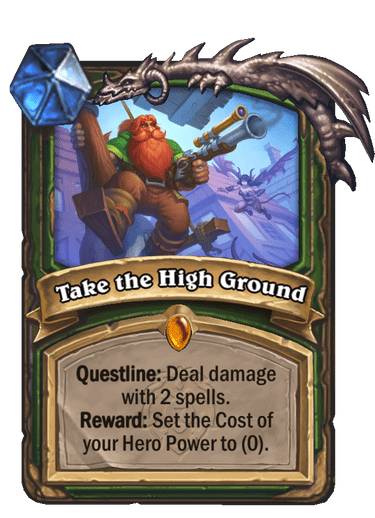 Fortunately, the second step is the same as the first, and having access to more mana means a larger range castable cards like Piercing Shot. This wider range of cards to cast means on average, we can find the 4 spells needed to finish this step by turn 5. Something else to note is that this calculation is assuming that we cannot trigger Explosive Trap. Being able to trigger it once brings the turn requirement down to turn 4, and being able to trigger the second one brings that chance from a bit below average up to 57% of the time. This means that we should typically be able to finish this step of the quest by turn 4 or 5, depending on the mana cost of the spells drawn. 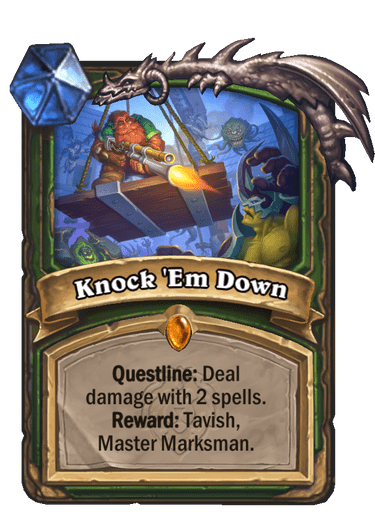 As for the last step, we have access to the full arsenal of tools to fetch spells, such as Barak Kodobane, Venomous Scorpid, as well as being able to take better advantage of Tracking and Resizing Pouch. Ignoring the 4 of these, we can expect to get 6 of them by turn 9, once again not including Explosive Trap. If we can get one to trigger, this brings it down to turn 8, and a second to trigger brings it down to turn 7. Now lets consider our other tools to help speed this up. Barak's 2 mana and 3 mana spell will always be damage spells, with a 50% chance to get a 1 mana damage spell. As for Venomous Scorpid, there is a 72% chance that one of the spells it offers will be a damage spell. Factoring in both of these, we can expect to draw all the spells to around turn 5-6 50% of the time, which is very efficient, so much to the point where the questline will be completed and Tavish will be played by turn 7. 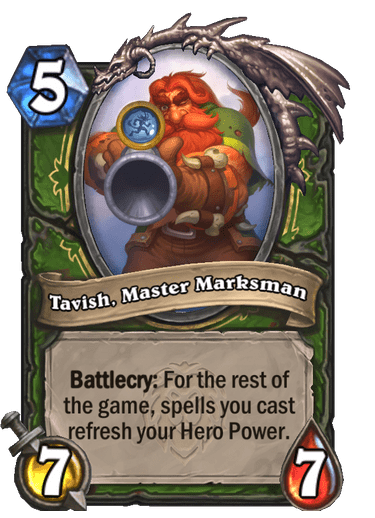 Tavish, Master Marksman is only the cherry on top for the hunter questline as far as I’m concerned. Every single reward for the steps are strong on their own, and combine to create a weaker version of one of the historically strongest hero powers in the game. The first step reward alone is something that already seems fine on its own, the second step turns it into 2 free damage per turn and then Tavish just puts it way over the top. It is hard to evaluate statistically how quick Tavish will end the game just because the main appeal of it is just keeping the board clean for all your minions, but rest assured, a free 2 damage per spell played is very strong, with the only limiting factor being the fact that hunter lacks card draw. The lack of draw is the only thing that would reasonably keep this quest down as Hunter is almost the polar opposite of Priest in terms of card generation. It will be interesting seeing how this quest plays out once people can get their hands on it as so many aspects of it point to being a powerhouse, yet the final reward is being held back by lack of draw.

What do all of you think about the Hunter Questline? So many arrows point towards it being a dominant card, both in terms of completing fast, as well as having a very powerful reward, yet it can be held back by something the class has almost 0 ways of fixing. That being said, it is still one I am looking forward to playing. If you have any questions about the math behind any of the numbers shown in the article, let me know and I can explain it a bit further. Hope you enjoyed and I'll see you all in the next one!