Shortly after last week's leaks, Patch 24.0.3, the first after the release of the Murder at Castle Nathria expansion, is finally live and with it all the novelties that Team 5 brought to each game mode.

Here below you can find all the changes aimed at balancing the meta environments of both Standard and Wild, improving the least powerful classes and toning down the ones performing over the expectations:

The following cards have been adjusted down in their power:

The following cards have been adjusted up in their power:

Legendary Invitation (generated by The Countess)

As usual, all the nerfed cards, including Spirit Poacher, Stag Charge, Wild Spirits and Ara'lon, will be eligible for full dust refunds for two weeks following Patch 24.0.3.

In this article, we're going to discuss the implications of the aforementioned card nerfs and what they could mean for both formats. 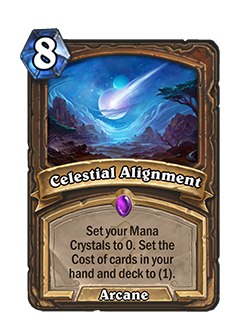 No longer affects the opponent's Mana Crystals and cards (it affected both players before).

It's not like Celestial Alignment was a tier 2+ deck before this nerf, but the fact that such obnoxious strategy kept seeing play even after 5 expansions finally made Team 5 push the button and nuke the card. We bet that, deep in their heart, they regret a bit having printed Alignment.

With the current effect, Celestial Alignment will still allow huge Lady Anacondra swing turns, but at the same time it won't affect your opponent in any way, meaning that it represents an 8 mana "destroy your Mana Crystals and hope that your opponent won't kill you on their following turn" - such occurrence, however, will be more likely from now on, since your opponents will be able to play more than just one card after the Alignment turn, putting the Druid in a very unfavorable position. We hope this change will be enough. 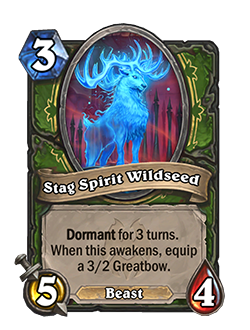 If you always had to wait the whole 3 turns in order for Stag Spirit Wildseed to awaken, we think that a 4/2 Stagpoint Wildbow would've been more than fine. However, with Wild Spirits and Twinbow Terrorcoil being actual Hunter cards, this nerf becomes easier to understand.

Long story short, Team 5 themselves pointed out that Stag Spirit Wildseed was able to dish out more damage than initially expected, so this change is aimed at reducing Wildseeds' powerlevel without them falling out of relevance, which, to be frank, is something we'd be terribly sad about, considering that the archetype feels so flavorful and unique.

Although this is a direct nerf to both Face and Big Beast Hunter, we consider Stag Spirit Wildseed's card change as a hit to Questline Defend the Dwarven District as well, as this strategy has been trying to incorporate a Wildseed package for board presence, more damage output (see Stagpoint Wildbow) and Stag Charge as an additional card to progress the Quest with. 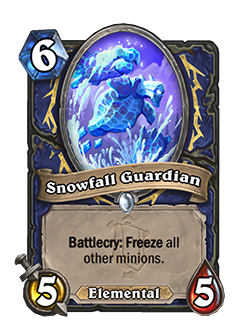 After the nerf received 2 weeks into Fractured in Alterac Valley, Snowfall Guardian receives another balance change...2 weeks into Murder at Castle Nathria!

We think this change is going to be healthy for the meta: while Shaman will still be able to chain board Freezes for multiple consecutive turns (thanks to Brilliant Macaw), the class won't be able to build up a huge board in the meantime. In other words: Snowfall Guardian's stalling potential is still intact, but the strategy's lethality will drop significantly, as you will never have to face games where your board is completely locked, you cannot play any cards but your opponent has multiple 10+ Attack units ready to OTK you. Although we like Guardian, it was time for this unhealthy gameplay pattern to go. 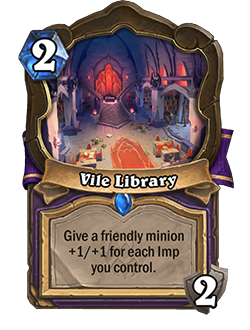 Loses the initial unconditional +1/+1 (before it gave +1/+1 even if you didn't control any Imps).

A nerf aimed to make Imp Warlock, a very board-based aggressive strategy like the class hasn't seen in a long while (Prince Keleseth Zoo Warlock with Happy Ghoul, Saronite Chain Gang and fricking Voodoo Doctor?), slower without killing it.

As many players pointed out, we feel like the (light) nerf targets were either Vile Library or Impending Catastrophe (both of which could've been nerfed by just removing the initial buff/card draw), so it is understandable that Team 5 tried to slow down Implock's damage output in the early game without touching its refill tool.

Unless the meta shifts in a way that is completely hostile to the strategy, we expect Imp Warlock to tank this nerf and remain at the top of the meta, possibly slowing down a bit in the meantime. 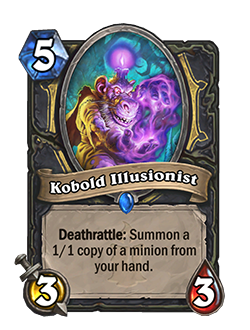 We see why Kobold Illusionist is on this list, but we cannot help but be sad about it. With the increasing amount of Deathrattle support Rogue has received throughout the years since Kobolds & Catacombs (Necrium Blade, Snowfall Graveyard, Shattershambler, Counterfeit Blade, Sketchy Information) and the better quality of late game drops (Neptulon the Tidehunter being the latest addition on the list), it is clear that Kobold Illusionist would have met its demise sooner or later.

In particular, Snowfall Graveyard into Sketchy Information into double Kobold Illusionist's Deathrattle was a card combination with the potential to generate too many non-games as soon as turn 3, which is a bit too much even for Wild.

What do you think about these changes? Are there any other cards you would've liked to see nerfed or buffed? Let us know in the comments below!