After the Murder in Castle Nathria, Sylvanas has been brought before the Jailer to answer for her crimes. What crimes you ask? Well, there have been many. Watch the trial unfold in the all new Maw and Disorder Mini-Set!

Hearthstone's new Maw and Disorder Mini-Set is quite the court drama, not only in theme and art, but in the multiple pun-filled card titles. Much like the Onyxia's Lair Mini-Set was filled with card names referencing memes or mechanics of raids in World of Warcraft, Maw and Disorder has multiple cards with clear legal themes.

In the interest of fully enjoying all of the puns, card names, locations and flavor text of the set, we have engaged the expertise of Nate Wolfe, a real-life legal professional and host of the Born to be Wild Podcast.

First and foremost, the name of the Mini-Set, “Maw and Disorder,” is clearly a nod to Law & Order, an ongoing legal drama franchise that's run since 1990. Like all legal cases, the court of the Maw has several key members who play major roles in Sylvanas' trial. 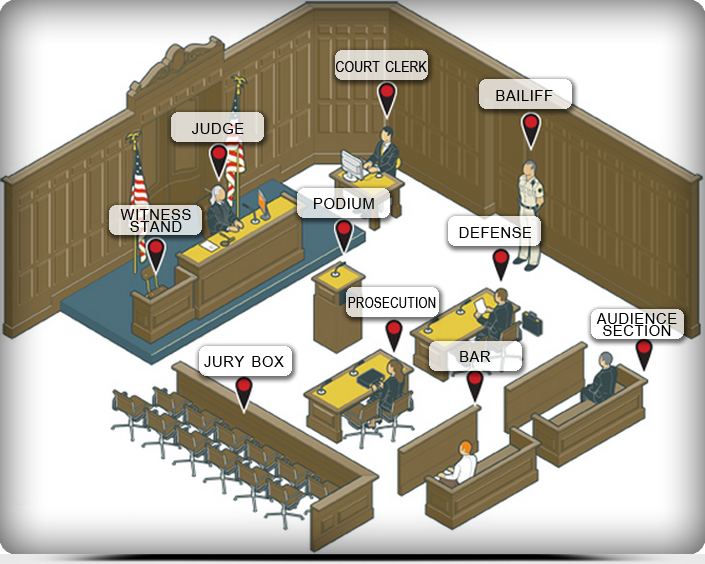 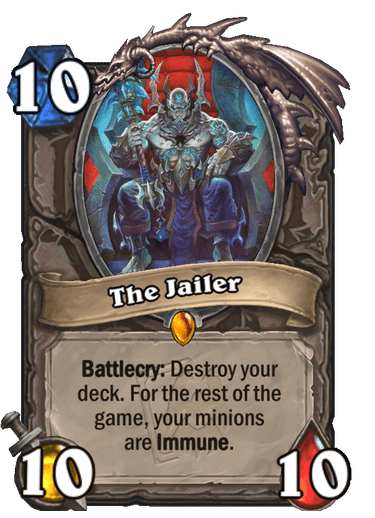 The role of the judge during a criminal trial is to provide jury instructions to the jurors, to rule on motions and objections from the defense/prosecution, and to sentence the defendant if they are found guilty. 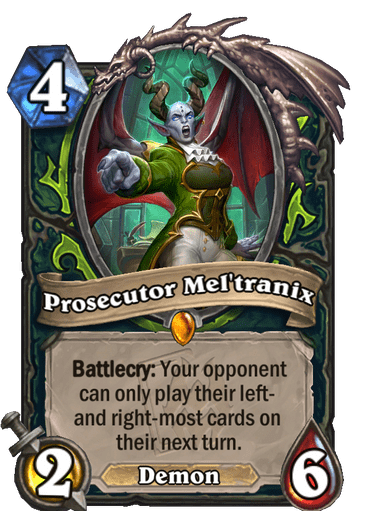 The prosecutor’s job is to convince the jurors that the defendant is guilty of the crime they are being accused of beyond a reasonable doubt. There are different burdens of proof depending on the type of case (criminal vs civil). In civil cases, the burden of proof is a preponderance of evidence (more likely than not, 51%). In criminal, the burden of proof of beyond a reasonable doubt, meaning that the prosecution must convince the jury there there are no other reasonable explanations and there are no doubts that would affect a person’s “moral certainty” that the defendant is guilty. The reason the standard of proof is so much higher in a criminal prosecution is because the defendant’s liberty or life are at stake. 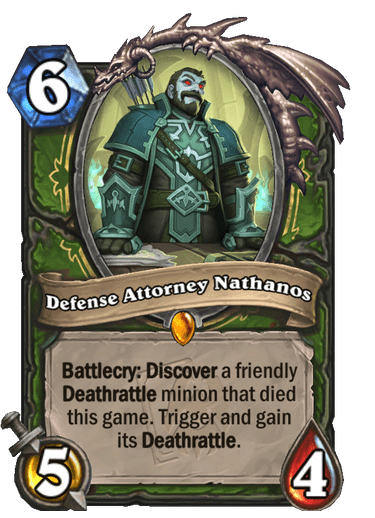 The Court Clerk is responsible for taking notes, performing data entry, and administering oaths to witnesses. 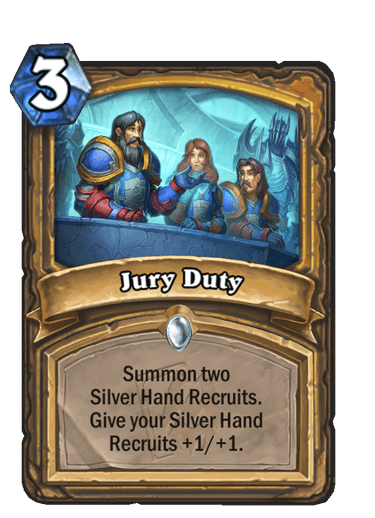 The jury’s role is to listen to the evidence presented by the prosecution and defense and ultimately to decide whether there is sufficient evidence to convict the defendant of the crime they are being accused of beyond a reasonable doubt. Jury verdicts must be unanimous, meaning to find the defendant guilty or not guilty, all jurors have to vote the same. If the verdict is not unanimous/the jurors cannot come to a consensus, a mistrial is declared and the jurors are discharged.

With the key players out of the way, lets look at some of the other characters who hang around this afterlife court. 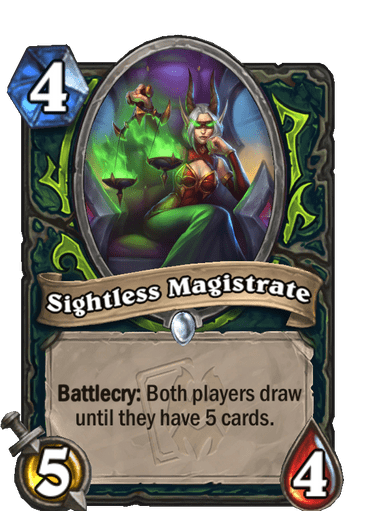 Magistrates and Judges have very similar roles, though there are some differences - both can hear cases, rule on objections and determine the outcome of legal arguments, though judges have more authority. The artwork here shows the magistrate with the classic scales of justice (weighing the evidence on each side). The classic adage “Justice is blind” (which refers to justice being impartial and objective) and is also included in the flavor text: “Does ‘Justice is Blind’ still apply to Spectral Sight?” 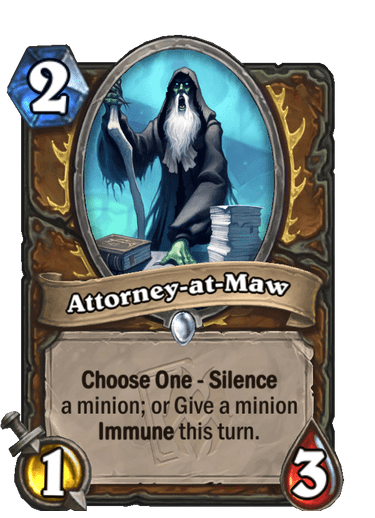 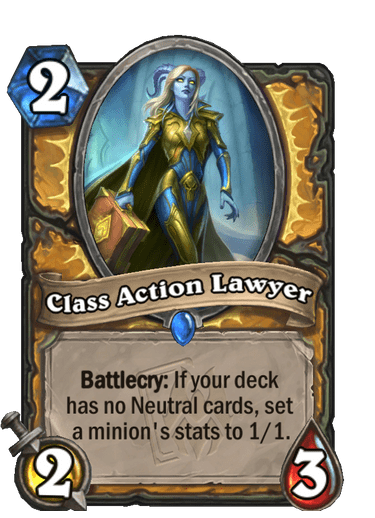 A class action lawsuit is a civil lawsuit where the plaintiff attorney is representing a group of plaintiffs, known as a class. Kinda like that recent class action lawsuit filed against Activision Blizzard for sexual harassment. Anyhow, these lawsuits are often filed for injury claims, and you can see the nod on the flavor text: “Have you or a loved one ever been injured in a Consecration?” 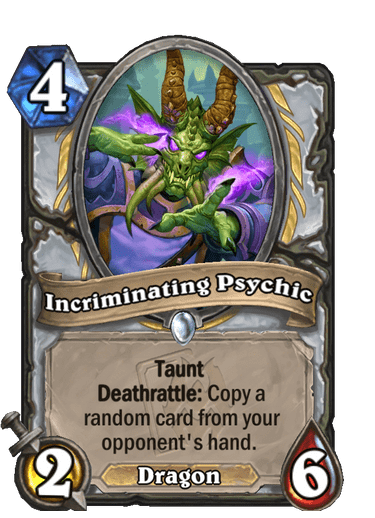 Incrimination refers to showing evidence that someone is guilty of a crime. The flavor text reads: “Good news: He knows Kazakus’s secret identity! Bad news: Now he’s here!” Spoiler, Kazakus is a dragon. 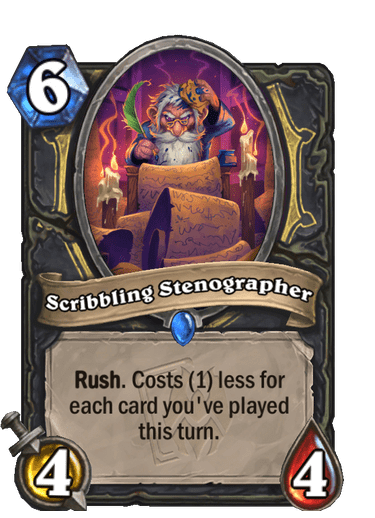 A stenographer is a fancy word for Court Reporter, someone who uses a stenography machine to take down verbatim everything that is said on the record during a court hearing. Cute flavor text: “A truly staggering 180 scribbles per minute!” 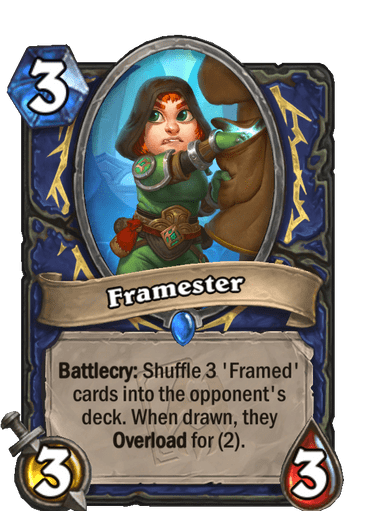 Someone framing someone else of a crime by planting evidence. The art shows a gnome putting something (beans?!) in someone’s pocket. The flavor text reads: “Who put these beans in my pocket?!” -Man With Beans in Pocket. 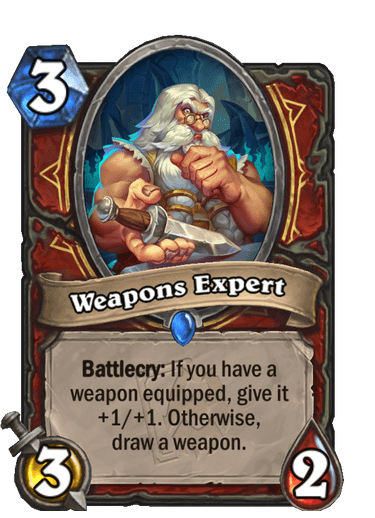 This dude is an “Expert Witness”, someone who testifies and is qualified as an “expert” because they have extensive experience or knowledge in a specific field or discipline beyond that expected of a layperson. The flavor text, “Yes, Your Honor, this appears to be some sort of blade” is hilarious because, well, this is the worst expert ever, LOL. 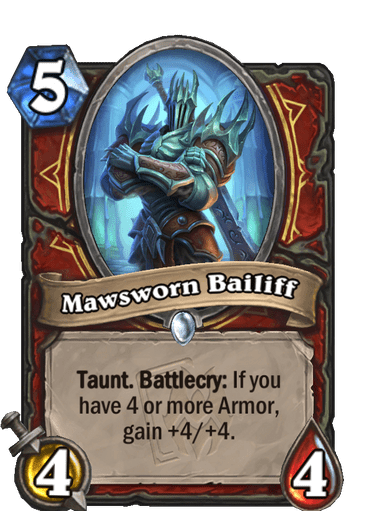 The bailiff is the law enforcement person who provides security in the courtroom and is charge of the jury during the trial. The flavor text, “Bailiff, bring in the dancing lobsters” is a reference to a scene in Nickelodeon’s Nick Rewind. 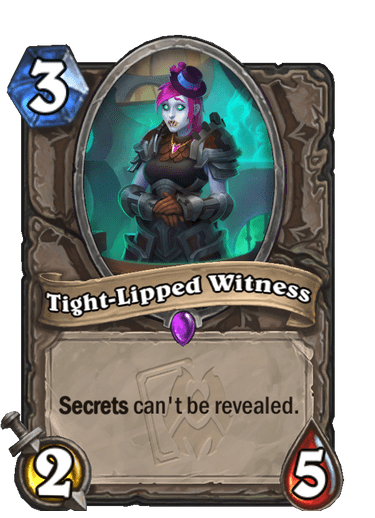 This refers to someone who refuses to testify in court. This is pretty funny because the character is “The Mute” - one of the bosses from Witchwood’s Monster Run. Mute meaning can’t speak. This also fits with the ability where Secrets can’t be revealed.

It's not just minions that are getting a court coat of paint, though. Numerous legal terms are punned into the ground here or cleverly turned into double-meanings with Hearthstone mechanics. 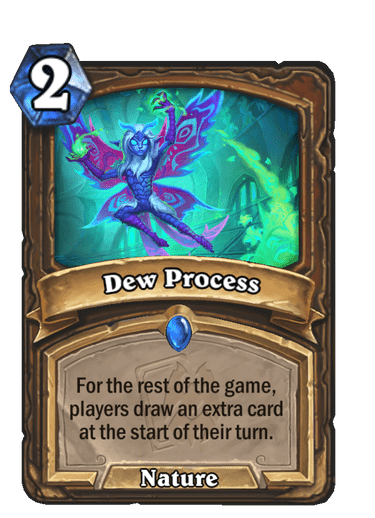 This is my favorite pun from the set. It refers, of course, to Due Process. The TL;DR version is that the Due Process Clause is referred to in both the Fifth and Fourteenth Amendments to the US Constitution, and stands for the concept that legal matters must be resolved according to established rules and principles and that individuals should be treated fairly. “No person shall be deprived of life, liberty or property without due process of law.” 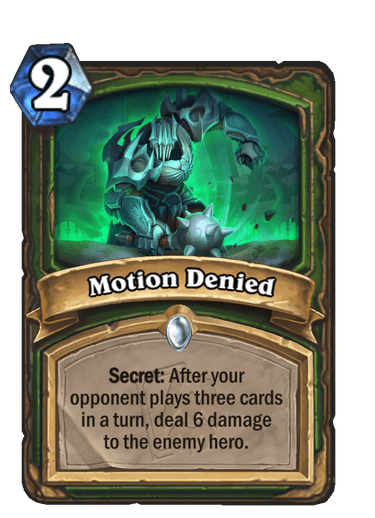 When either side makes a motion, the judge either Grants or Denies it. I love here how the judge is, well, very vigorously denying the motion with the mace in place of a gavel. 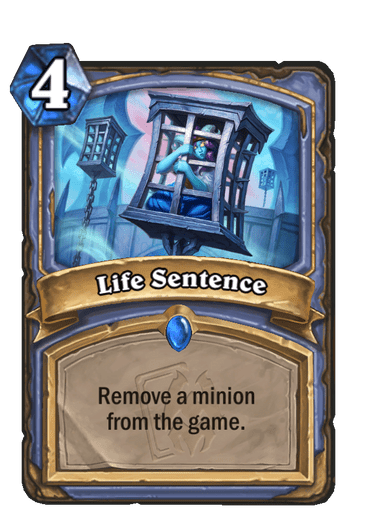 Many criminal sentences include jail time with the ultimate sentence (outside of the death penalty) being life in prison. 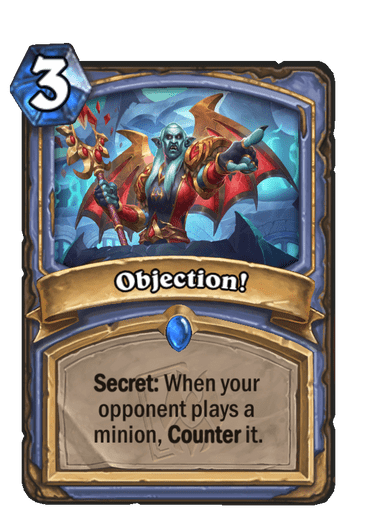 A party may object, or state their disapproval, primarily for a question or statement they believe is improper. Typically objections have a reason (states facts not in evidence, hearsay, speculation, leading, etc.). The text of the card works here perfectly. Your opponent plays a minion and you object to it, LOL! Objection sustained! It’s also another great nod to the Phoenix Wright Ace Attorney franchise where our titular character yells “OBJECTION!” with a similar pointing finger. 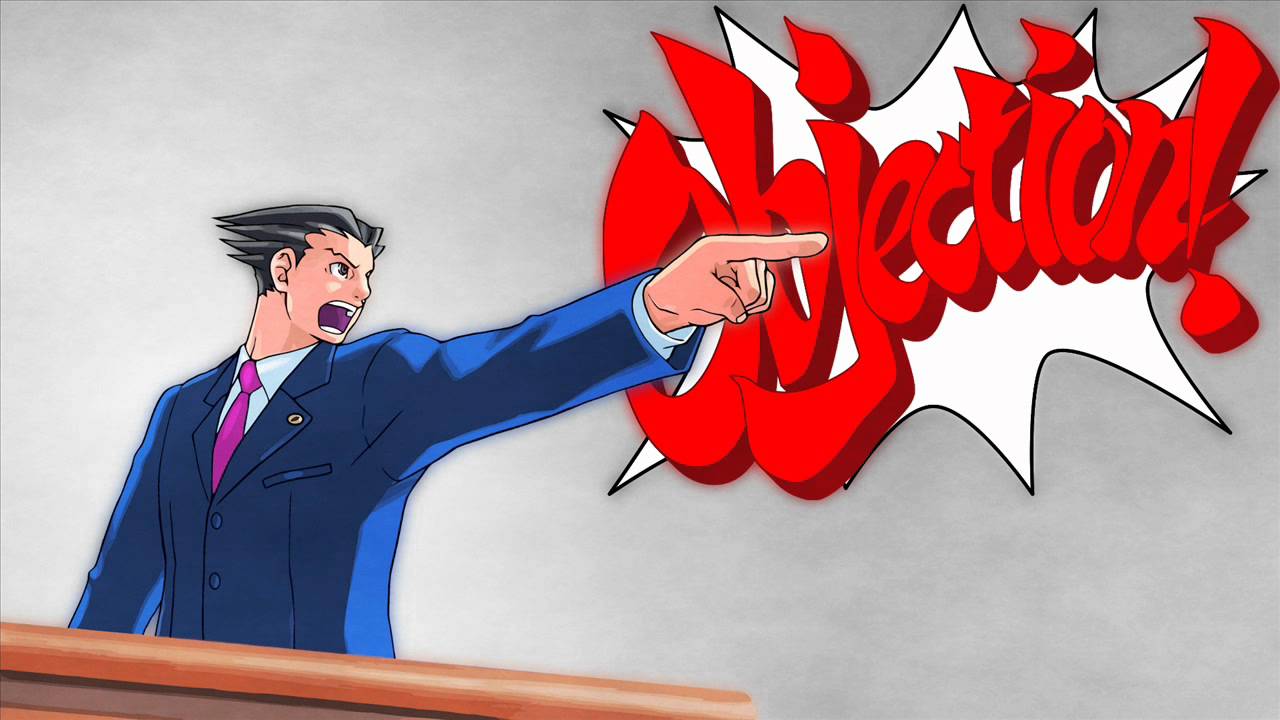 Order in the Court 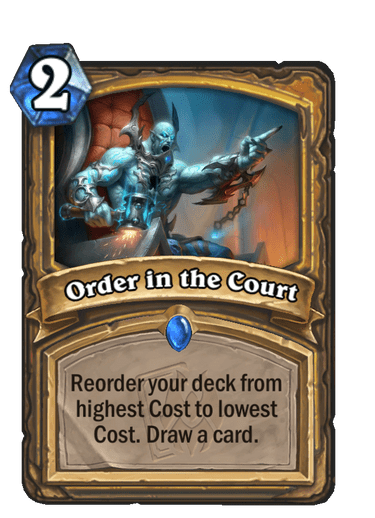 This phrase is historically said by the judge when people are being unruly in court, sometimes coinciding with slamming the gavel on the bench, which is seen in the artwork here. The function of the card takes the name literally, ordering your cards by mana cost in your deck.

The defendant has a right to a jury of their peers - they’re the ones who hear the evidence and decide whether there is enough to convict. Having the card summon two Silver Hand Recruit jurors is just hilarious, especially because of their “Reporting for Duty!” entrance line. 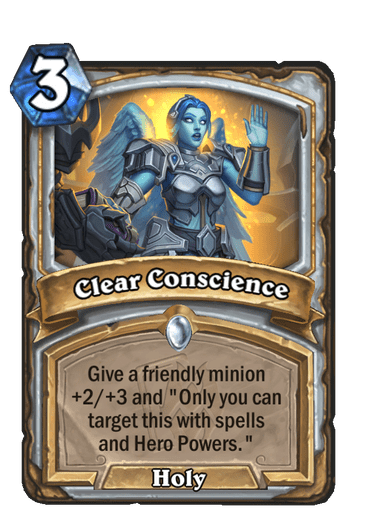 The card art shows a scene of someone swearing an oath with one hand up, the other on a book. When someone testifies in court, they typically raise their right hand (here it shows the left, oops). Historically this was done with one hand on the Bible, which largely isn’t done anymore. The oath is usually something along the lines of “Do you swear to tell the truth, the whole truth and nothing but the truth so help you God?” This is referenced by the flavor text, which reads: “Do you swear to give the buff, the whole buff, and nothing but the buff, so help you Kyrestia?” In World of Warcraft, Kyrestia the Firstborne is the ruler of Bastion. 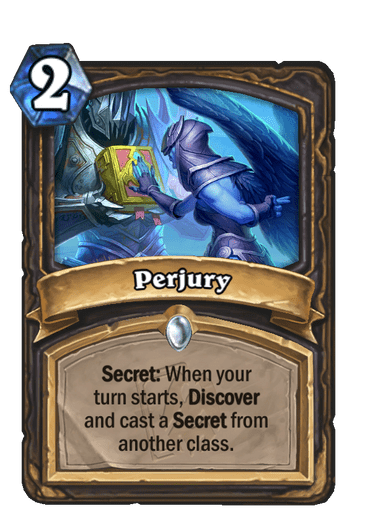 Like we discussed in [Hearthstone Card (Clear Conscious) Not Found] where the witness is swearing an oath to tell the truth, this is the opposite of that. Perjury is lying under oath, and is typically a chargeable criminal offense in and of itself. In the picture, you can see the character crossing their fingers behind their back, the classic indicator of not telling the truth. The flavor text reads: “By liar be perjured” which is a hilarious flip of the classic Ragnaros' line “By fire be purged!” 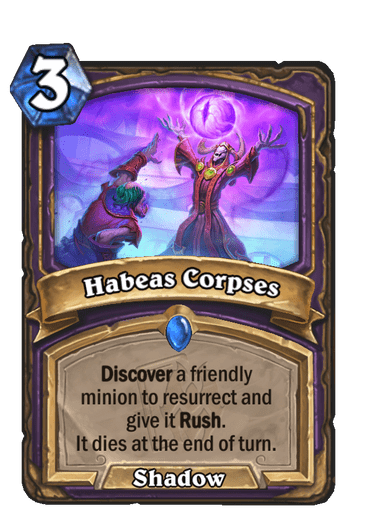 This is probably my favorite card name in this mini-set. A lot of legal terms come from Latin, and this is a great example. Habeas Corpus is a fundamental right in the Constitution that protects against unlawful and indefinite imprisonment. The direct Latin means “Show me the body,” which is right on point for Warlock. The flavor text says: “Whoops, typo!” and it’s hilarious to think of a real lawyer saying Habeas Corpses in a real courtroom or legal environment.

Call to the Stand 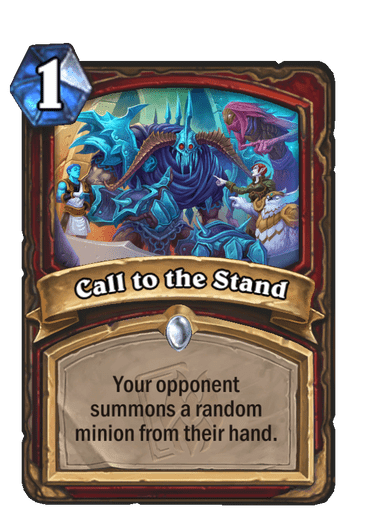 “The Stand” is a reference to the Witness Stand or Witness Booth, the location in the courtroom where the witness testifies. The flavor text reads: “Don’t worry, there is a chair for you to sit in. It’s very misleading.” Sit… Stand… get it?

Lastly, we have our star defendant, Sylvanas Windrunner, who has been accused of multiple crimes. With "Accusations" as a new set mechanic, our old Banshee friend/nemesis stands accused of murder, theft and arson, which is the unlawful willful or deliberate burning of property. 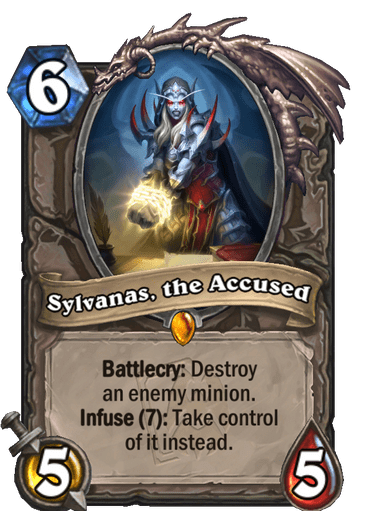 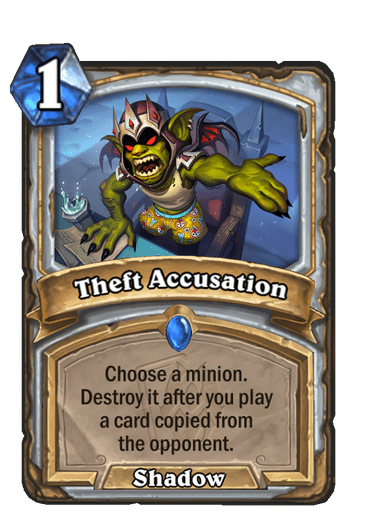 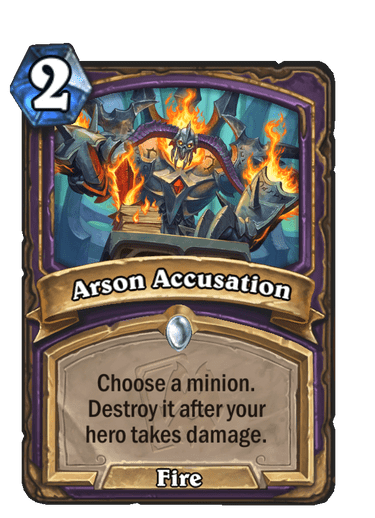 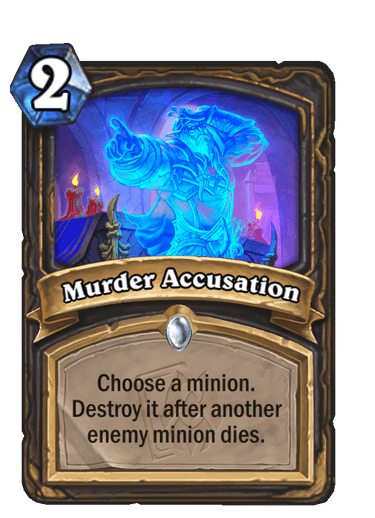 Lucky for Sylvanas, the judge might just be biased in her favor if WoW lore holds up in this set. The flavor text says: “At one point, the Jailer served as Arbiter over the souls of the Shadowlands. He was the epitome of an unbiased, righteous judge of character. WAS.” Clearly he lost his job for a reason and let's just say we can't be sure he won't let Sylvanas out to cause more trouble.

For more information on The Jailer, the Maw, and other parts of the Shadowlands, keep an eye out for upcoming lore guides. For more from Nate Wolfe and the Born to be Wild Podcast, visit their website or find them on Twitch.

What is your favorite legal pun from the cards in the Mini-Set? Tell us in the comments below!