Shortly after last week's leaks, Patch 24.0.3, the first after the Murder at Castle Nathria expansion's release, is finally live, and with it all the novelties that Team 5 brought to each game mode.

Here below you can find all the changes aimed at balancing the meta environments of both Standard and Wild, improving the least powerful classes and toning down the ones performing over the expectations:

The following cards have been adjusted down in their power:

The following cards have been adjusted up in their power:

Legendary Invitation (generated by The Countess)

As usual, all the nerfed cards, including Spirit Poacher, Stag Charge, Wild Spirits and Ara'lon, will be eligible for full dust refunds for two weeks following Patch 24.0.3.

In this article, we're going to discuss the implications of the aforementioned card buffs and what they could mean for both formats - if you want to take a look at out card nerfs commentary, you might want to click here.

Disclaimer: some of these buffs have to be considered together, so we're going to comment on them as such in order to provide a more on-point analysis. 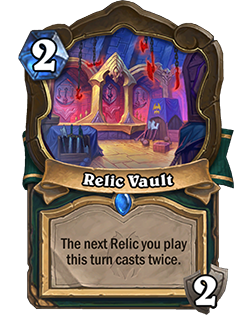 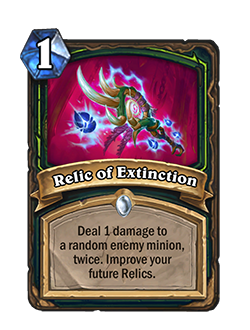 As you already saw from the list above, Demon Hunter received quite a lot of card buffs, two of which aim to improve the new Relic archetype printed in Murder at Castle Nathria.

Relic of Extinction - Considering that it cannot go face, Relic of Extinction going to 1 mana gives Demon Hunter a rather good early game removal (which is more on par with what the card's initial power level should be without any upgrade from other Relics) as well as a turn 1 play that can answer popular 1-drops like Irondeep Trogg, Batty Guest, Shivering Sorceress and Flame Imp. Definitely a right step towards Demon Hunter's return to playability.

Relic Vault - By being moved down to 2 mana, Relic Vault not only becomes a lot more manageable in combination with other non-Relic cards, but it generates a cute curve with a potential turn 3 Relic of Phantasms into turn 4 cooldown into turn 5 Relic of Dimensions - pretty decent we'd say.

All in all, a couple of well done card buffs. 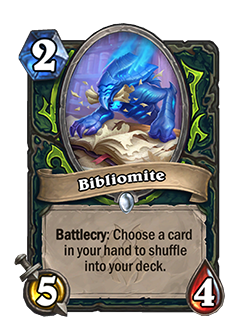 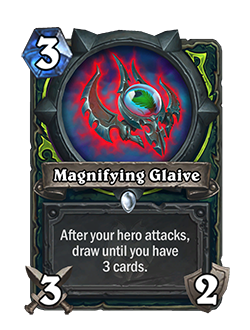 Demon Hunter didn't receive buffs just in the Relic department, as the new "discard" archetype got some love as well.

Bibliomite - See it like this: Warlock has access to Felstalker, which has a quite similar effect but it's "just" a 4/3; then why is Bibliomite seeing its 4/4 stats being moved to 5/4? Simple: because Warlock has stronger payoff cards when it comes to dumping your hand (Malchezaar's Imp, Silverware Golem, Boneweb Egg) and Demon Hunter only has Kryxis the Voracious and Magnifying Glaive. More Attack power on Bibliomite means more damage pushed even if your opponent removes it and therefore more lethality for the Demon Hunter player.

Magnifying Glaive - We wonder if a Glaive that draws 4 would've been too strong. In the end, Team 5 applied the same reasoning as for Bibliomite: more damage output means more lethality, and more lethality means Demon Hunter winning more games. 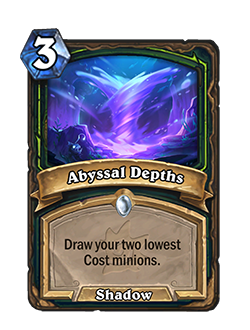 Let's be real: a 4 mana draw 2 with no additional effect was atrocious, especially in a class so efficient at drawing like Demon Hunter. Now that Abyssal Depths costs 3 mana, it's on par with other similar effects like Shroud of Concealment, Arcane Intellect and so on.

Another implication worth pointing out is that a 3 mana Abyssal Depths aligns perfectly into a turn 4 Vanndar Stormpike for potential Big Demon Hunter shenanigans, which we expect to see experimentation. 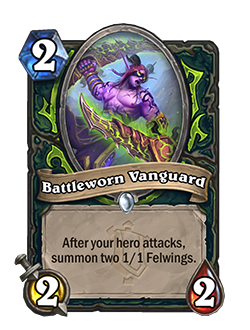 We suspect that, due to pre-nerf Drek'Thar's power level and the reduced card pool, Battleworn Vanguard was just benefitting from an overall favorable situation. Mind you: we're not saying that the card wasn't (or isn't) good, but rather that Demon Hunter was just so good and smooth back then that all its other tools shined accordingly.

Now that Drek is out of the way and each class has more tools to fight back with, we like Team 5's gutsy decision to revert Battleworn Vanguard and helping Demon Hunter, one of the worst classes of the Murder at Castle Nathria launch by a large margin. 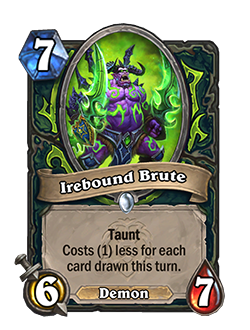 Now that most of Demon Hunter's mass card draw tools (Glide, Skull of Gul'dan), as well as Felosophy, rotated, there aren't any more reasons for Team 5 to keep Irebound Brute nerfed.

On a final note, we wonder whether a 7 mana Irebound Brute could see play in Aggro "Discard" Demon Hunter - let's make an example: considering the card you draw at the start of each turn, if you draw 3 cards with Magnifying Glaive, Brute will end up costing just 3 mana, which seems like a decent deal to us! 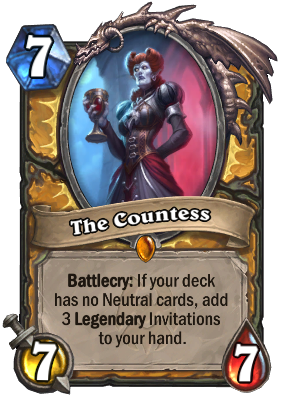 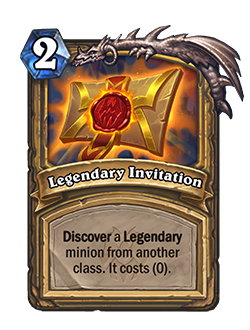 Legendary Invitation's cost is now 2 mana (down from 3).

A nice change, but... does it really make any difference? In a meta with strong disruption tools like Mutanus the Devourer and Theotar, the Mad Duke being almost omnipresent, you need more than a 7 mana do nothing to give up on all Neutral cards during the deckbuilding phase.

Sure, 2 mana Legendary Invitations are a lot more manageable, especially since you can go Countess into Invitation on turn 9 instead of turn 10, but is that really broken? A couple years ago, Paladin was able to go Pure thanks to an early turn 4 payoff in Lightforged Zealot and thanks to the really solid Libram package, both of which are missing now.

It is clear as the sky that Paladin will receive more Pure support in the future, but we do not expect things to change for the archetype any time soon. 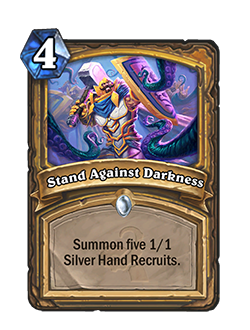 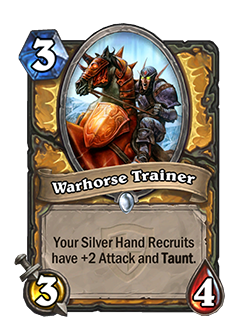 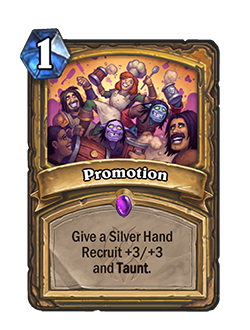 Stand Against Darkness - Cost is now 4 mana (down from 5).

This balance patch has brought some love for Dude Pally, another archetype being pushed in Murder at Castle Nathria that however hasn't seen any success in entire years, despite all the support received.

Stand Against Darkness - Just like many other changes to old cards in this article, a buff that seems long overdue: 5 mana 5/5 in stats split among 5 bodies isn't enough nowadays. Now that Stand Against Darkness is at 4 mana, we can see it becoming more playable and capable of generating a really interesting curve with a turn 3 Warhorse Trainer.

Warhorse Trainer - Wow, this card looks really strong now. Let alone the additional +1 Attack buff (which is already pretty good on its own), the fact that Warhorse Trainer now gives each friendly Silver Hand Recruit Taunt not only means that you'll be able to hide Trainer behind your Dudes, but also that you opponent won't be able to ignore your Recruits and go face.

Promotion - Same reasoning as for Warhorse Trainer: with Taunt, your opponent cannot ignore your buff Recruit and keep hitting you in the face, but will necessarily have to deal with a large sized body. 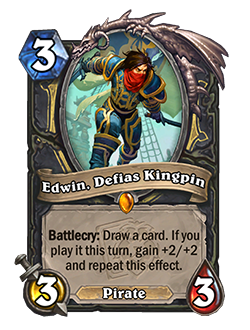 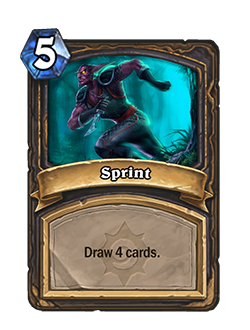 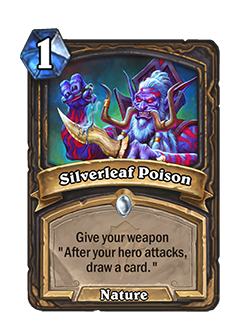 Rogue players were asking for some love in the card draw department, and Team 5 has wonderfully delivered.

Edwin, Defias Kingpin - We... do not understand. Why? Edwin was already a very good card, especially in combination with Mr. Smite: while we agree with the other two card draw buffs, we struggle to see the reasoning behind this one. We wouldn't be surprised to see this buff reverted in the future.

Sprint - 7 mana draw 4 was laughable; 6 mana draw 4 was not good enough for a Constructed deck; 5 mana draw 4? In a world with Preparation and Blackwater Cutlass? Now we're talking. For the first time in a very long while, Sprint finally looks like a card worth our attention.

Silverleaf Poison - For as much as we hate Weapon-related strategies, Weapon Rogue has lost many tools with the April's rotation and hasn't gained any so far, which validates Silverleaf Poison being buffed to 1 mana. We do not expect this card to see play any time soon, but at least it's another source of card draw for Rogue. 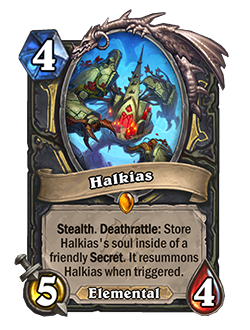 Pre-buff Halkias was just not good enough: with the limited Secret pool available for Rogue, a smart opponent was able to keep Halkias in check without too many problems, forcing it to come in play and return into a Secret at will.

Now that is has Stealth, once Halkias returns in play after a Secret is triggered, your opponent won't be able to interact with it and kill it as easily as before - this unit has gotten better.

However, just 3 Secrets and 2 synergistic cards may not be enough to justify such strategy, so we expect Halkias to have more chances once the card pool gets bigger: maybe with the next Mini-Set? 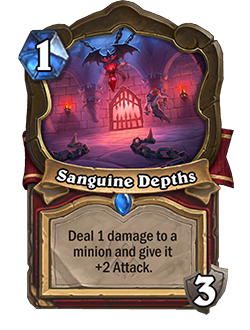 If you want to damage your own stuff, you better have some valid reasons: 1 damage for +1 Attack seemed too fair of a deal to us, so improving Sanguine Depths's Attack buff to +2 makes this Location more interesting.

In the end, Enrage Warrior is not an archetype that wants to close matches relatively soon, so more damage output is what Garrosh is looking for. Definitely a step in the right direction. 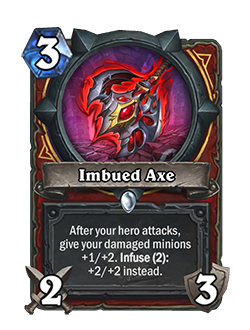 All in all, 1 less friendly minion that needs to die in order to Infuse this weapon and less difference between the base form and the Infused form. While this version of Imbued Axe certainly looks more promising, you still need a strong Enrage backbone, which Warrior doesn't currently have: you cannot expect just Anima Extractor, Crazed Wretch and Decimator Olgra to carry the entire deck, right? Just like Sanguine Depths, this is another step in the right direction, but we're still not confident in Enrage Warrior seeing play. 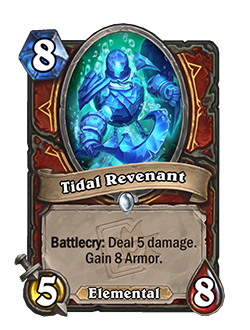 This felt like an unnecessary nerf when it was delivered before Murder at Castle Nathria: in fact, we pointed out that Tidal Revenant's main source of "unfairness" came from the back then 3 mana From the Depths - in our opinion, nerfing the latter would've adjusted the former, and in fact nerfing both turned out to be quite the overkill.

Now that Tidal Revenant is back to its original form, we expect it to return to be a valid alternative for Control Warrior, although we are sure that the next buff on the list will matter infinitely more. 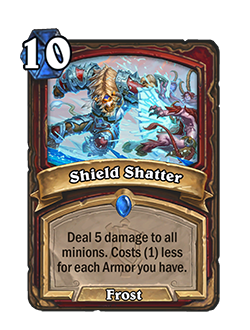 Probably the buff Warrior will benefit from the most. A couple months ago, Shield Shatter was able to keep an entire format in check, completely shutting down most aggressive strategies and standing almost on equal foot with the very powerful Drek'Thar Demon Hunter; however, the 1 damage nerf, as well as other balance changes that simultaneously hit the class, put Warrior in such an unfavorable position that the class is yet to recover from it. While Shield Shatter's nerf revert isn't likely to support the new Enrage archetype, Control Warrior might come back on the menu, especially since Frozen Buckler and all the other Armor gain tools are still here. 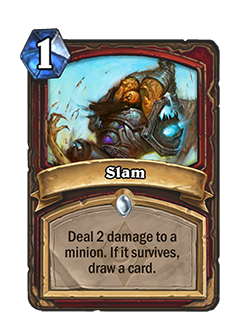 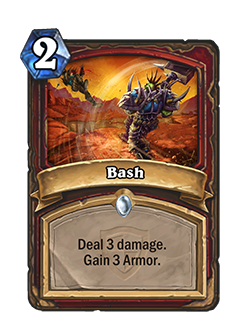 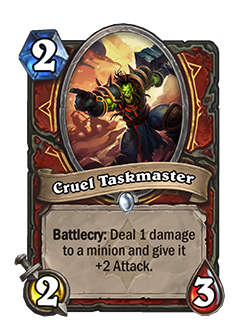 All three of these changes feel overdue, considering that Hearthstone has grown in power level a lot since their introduction in the very first few years of the game's existence.

Slam - This is now a reasonable card draw tool for Warrior, which can also be used as simple removal in case of 2 Health minions like Irondeep Trogg. While it's not going to bring the class back to playability all by itself, it's at least an additional viable option for Garrosh.

Bash - Just like Tooth of Nefarian a few months ago, Bash finally joins the group of 2 mana deal 3 damage spells with an upside. As we already said, this feels like an overdue change, which turns a rather underwhelming card into a very serviceable source of damage for Warrior: we expect this new Bash to see play in both future aggressive and slow lists.

Cruel Taskmaster - This unit's Health being brought up to 3 has the potential to make the (prior to the patch) underwhelming Enrage Warrior consider it during the deckbuilding phase. However, if we have to be completely sincere, we feel like the archetype needs a lot more than a River Crocolisk to be relevant.

What do you think about these changes? Are there any other cards you would've liked to see nerfed or buffed? Let us know in the comments below!