Isn't the flavor of fall the best of all?

Technically, Halloween doesn't even begin until October 31, but Hearthstone has already chosen to deploy something appropriately thematic for this month's Ranked Season - at least as far as adjacent event foods are concerned.

For the past week, the stand belonged fully to the latest Mini-Set, heralding the arrival of Maw and Disorder and holding a peculiar trial within Castle Nathria. Sylvanas this, Sylvanas that. But not everyone chose to attend such proceedings, instead opting to book a more casual trip to Darkmoon Faire with a group of renowned Mercenaries.

Short and simple, even though any pumpkin resemblance isn't immediately apparent. Perhaps if we brought up some special cakes or pies. And before everyone starts getting hungry, it's worth noting this particular card back continues Hearthstone's curious tradition with showcasing similarly edible items.

If your card (backs) always remain tasty, that sounds like an useful trait in a pinch. Just look at all these fancy decorations! 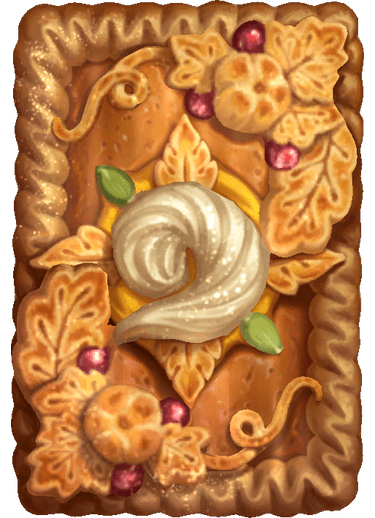 As far as this trend goes, we have seen another pumpkin all the way back in October 2014 with Hallow's End. And then Pie two years later. Or Ramen just a year ago in September. But this isn't only a Fall specialty, given Pizza or Cake themes during the previous Winter months. Make sure to place orders for your next favorite specialty.

As always, the card back shown above can be acquired by winning just 5 ranked constructed games (Standard, Wild, Classic) over the next few weeks - and we can recommend quite a few viable decks for the job. More Castle Nathria packs await courtesy of the end of month rewards. And the expanded Live Leaderboards should be now fixed as well, able to preserve the names of everyone who might make it into the exclusive Legend ranks!

If you wish to look at all available Hearthstone card backs, we've got an entire gallery dedicated to just that! Also, don't forget that the game now has a special feature for Favorite Multiple Card Backs - so you don't ever have to settle on just one at any given time, instead being able to choose from a wider personal selection to randomly cycle through.

And if you have ever missed out on any of the older card back options, it's worth checking whether they might be purchasable through the in-game Collection Manager. The eligible list might not've been updated in a while, but it's a fairly extensive one to begin with. Deep gold coffers most likely required.

There might be colder months ahead, but it's going to be one hot period of time for Hearthstone Esports. Both for the Constructed and the Battlegrounds crowd. And we should also see some other events taking place, between smaller and larger patches, and perhaps something special just for Hallow's End.

If competitive stakes aren't what you are most looking forward to, then this could be one of the least eventful months we've had this entire year. Unless there is something unexpected hiding in the shadows. You can bookmark this space and check back later as more specific dates become available. Meanwhile, we'll be listing everything below in chronological order, with links wherever possible:

We'll be sure to let you know if anything else comes up! Hearthstone's Team 5 rarely shares all their plans well in advance, and some things depend on the overall state of the game.

Even more offers might appear throughout the month, as is modern Hearthstone's norm. We'll then aim to update this list accordingly, as well as cover anything of note separately. With the arrival of Runestones as the new in-game currency, there are now a lot more available purchases that can only be found within the Hearthstone client and not on the Battle.net shop. You can always keep this space bookmarked if on the lookout for special deals:

Are you a devoted pumpkin fan, or just the opposite? What about your own busy Hearthstone schedule for this month? Let us know if we've missed any other relevant events and offers!